The RUSSIANS Have COME

It sounds like a Hillary conspiracy theory, and it is 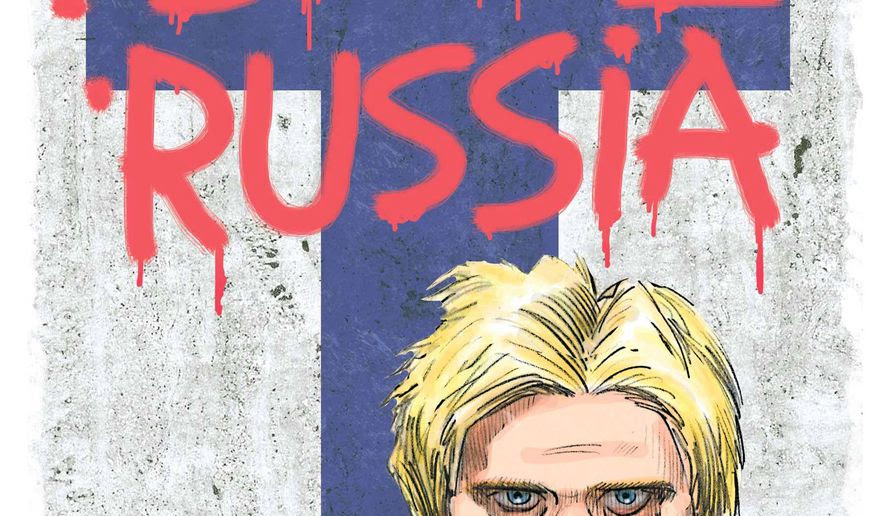 
ANALYSIS/OPINION:
While contemplating the Democrats’ agitated preoccupation with the Russians’ intrusion into our 2016 presidential election, many thoughts occur. However, the salient thought for me, engendered by our Democratic friends’ anti-Russian rhetoric, is that many years ago, during the early stages of the Cold War, the John Birch Society tried to warn us. The Society was raising the alarm even as the Democrats are today. How did we greet them? What did the Birchers get for raising the specter of Russian imperialism and world domination?
They were dismissed as political fanatics. Could it be that at some point in the present controversy about the Russians’ hacking Hillary Clinton and the Democratic Party, led by such lights as Charles Schumer, Nancy Pelosi, Hillary and Anthony Weiner, will go too far? The party will be dismissed as a Birch-like fever of fanatics, and the once proud Democratic Party, the party of Jimmy Carter and Bill Clinton, will be consigned to history’s dust heap, along with such other curiosities as the Birchers and in the 19th Century’s Know Nothings? No more Jefferson-Jackson Day speeches. No more Al Smith Dinners. Mark my words. This could be the party’s fate. The great Democratic Party may some day be replaced by the American Green Party or the America Nudist Party, whose campaigners would presumably be restricted to college campuses and specialized beaches.
Stranger things have happened. Moreover, the angry denunciation of the Russians by leading Democrats could have serious consequences. What if President Vladimir Putin — a former officer of the KGB, if I am not mistaken — is no longer amused by the Democrats’ excesses? What if he takes their charges against him seriously, and things escalate? The Russian arsenal includes nuclear weaponry. There may come a day when only President Trump and his emollient tweets stand between Democratic extremism and nuclear holocaust. Remember yesteryear and the vaunted fears of nuclear winter.
If we take the Democrats seriously the thing is not unthinkable. Yet, of course, no one takes the Democrats seriously. Early in March there circulated in public a photograph of Sen. Schumer and President Putin eating Krispy Kreme doughnuts together and yucking it up. There may come a day when Sen. Schumer will be as jovial with President Trump, but I am not holding my breath. By the way, I wonder what Mr. Schumer and Mr. Putin were laughing about over their Krispy Kremes.
Yet all this apprehension about the Russians, which to some degree I share with my Democratic friends and certainly with the John Birch Society, does not mean that Mr. Trump should not have fired FBI Director James Comey. We still adhere to the rule of law in these United States, and last July Mr. Comey broke it at least twice in his press conference. Then, too, Attorney General Loretta Lynch broke it when she entertained Bill Clinton on the tarmac at a Phoenix airport. I do not care how charming Bill was. At the time he was what the authorities call an accessory to the fact, and the fact was Hillary’s server and the classified documents she had on it.
How did we find ourselves at this comic pass with the Democratic Party warning us of the Russian menace — the Democratic Party whose members have included Alger Hiss and, more lately, Bill Ayers? Well, turn to the recently released bestseller written by Jonathan Allen and Amie Parnes, “Shattered: Inside Hillary Clinton’s Doomed Campaign.” All the pundits are talking about it, and there are things to admire in it. For instance, turn to Page 395. There you will find this revelation: “Hillary declined to take responsibility for her own loss . Hillary kept pointing her finger at Comey and Russia . That strategy had been set within twenty-four hours of her concession speech . For a couple of hours [Hillary and her aides] went over the script they would pitch to the press and the public. Already, Russian hacking was the centerpiece of the argument.” Now it is the “centerpiece” of the mainstream media and the Democratic Party’s campaign against Donald Trump.
But let us recall that for months both the mainstream media and the party that is looking more and more like the John Birch Society have been trying to link this hacked information to Donald Trump. What will happen if there is no corpus delicti? If people like acting FBI Director Andrew McCabe continue to say they have found no collusion between the president and the Russian government?
Will this controversy just fade away even as Mr. Trump’s harassers move on to ever more fanciful charges? I am betting that will be the case. After all, this week The Washington Post claimed Mr. Trump leaked classified information to two Russians with his national security adviser standing by. Official Washington became hysterical, though the week before, The Post published two false stories, and the national security adviser hurried out to pronounce the story false.
Has Hillary written the score for this opera buffa?
Source>http://www.washingtontimes.com/news/2017/may/16/russian-hacking-of-election-overblown/
Posted by theodore miraldi at 7:17 AM