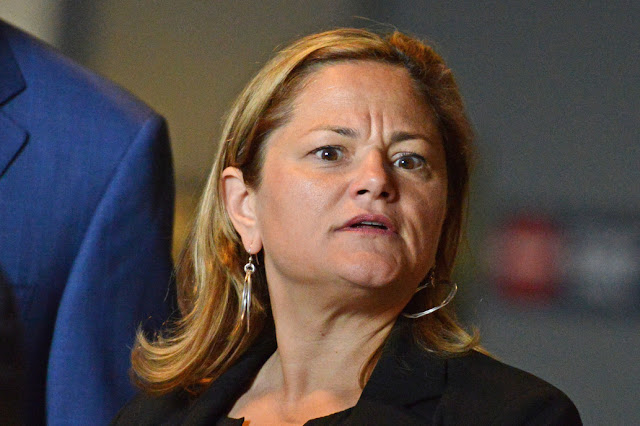 Breaking news from 2025: The New York City Council gives its Hero of the Year award to Hamza bin Laden, a son of Osama bin Laden. In making the award, the Council declares that the bin Laden family has suffered enough since the “unfortunate events” of 9/11 and credits Hamza, who took over al Qaeda, for being an “inclusive fighter for Muslim rights.”
Time does not heal all fools and when it comes to stupidity, the future looks a lot like the present. No, the City Council will never learn.
In case you haven’t heard, Council speaker Melissa Mark-Viverito is the prime suspect in the decision by the board of the Puerto Rican Day parade to honor a convicted terrorist, Oscar López Rivera, as a National Freedom Hero.
Her “hero” was found guilty of trying to overthrow the government of the United States with FALN, a terrorist organization that carried out 120 bombings in New York, Chicago and elsewhere.
Its 1975 bombing at Fraunces Tavern in Manhattan killed four people.
López Rivera defended violence as necessary to free Puerto Rico from American colonialism so it could become a socialist country.
None of that makes him an American hero — except to Mark-Viverito, a radical Puerto Rican with a long affinity for homicidal maniacs. She was photographed three years ago wearing a communist beret and standing next to a woman wearing a Che Guevara ­T-shirt. Later, she shared a computerized image of herself in Che Guevara likeness.
So her campaign for López Rivera’s release from federal prison was no aberration. After President Barack Obama commuted his sentence, Mark-Viverito flew to Puerto Rico to escort him to a public rally.
On the other hand, Mark-Viverito only joined in the Council’s recitation of the Pledge of Allegiance to the flag about the time she became speaker.
Like López Rivera, she wants independence for Puerto Rico. Alas, the vast majority of Puerto Ricans don’t, with proposals to that end getting only a sliver of the islands’ vote. Violence was the FALN response.
It’s also worth noting that Puerto Rico’s current governor, Ricardo Rossello, slammed the decision to honor López Rivera, calling it “beyond comprehension.” He told The Post that “I firmly reject this being associated with the people of Puerto Rico.”
For her part, Mark Viverito musters only the tired argument that “ultra right-wing forces” in Puerto Rico are stirring up opposition. This from the same pol who equated President Trump’s immigration policies with “ethnic cleansing.”
Her history and this incident show how far from the mainstream Mark-Viverito is, but what’s remarkable is that her terror-coddling hasn’t stopped her rise in the Democratic Party. Mayor Bill de Blasio supported her for Speaker, as did other borough leaders and her colleagues, and the mayor is planning to join her in the parade on June 11, marching beside or behind Lopez Rivera.
Of course, de Blasio himself is a card-carrying lefty from way back, having sneaked into Cuba for his honeymoon and waxed nostalgic for the good old days of the Sandinistas in Nicaragua — who also killed and tortured their way to power.
Yet with the exception of Bronx borough president Ruben Diaz, Jr, no other top Democrat in the city or state will march this year because of López Rivera. Good for the boycotters, but it would be even better if they spoke forcefully about why.
Gov. Cuomo, for example, waited for police organizations and major sponsors to pull out before he made the choice not to march — without explaining why. Only on Memorial Day did he give a reason to a reporter, saying, “This has been an injection of politics into the parade that I think, frankly, was unfortunate.”
Sorry, but terrorism is not “politics.” It is terrorism and sweeping it under the rug with euphemisms isn’t leadership.
Nor did Cuomo criticize de Blasio and others for marching, saying, “Everybody has to make their own decision.”
Now imagine a pro-Trump rally. Would Cuomo stand silent about Dems who marched to support the president of the United States who is from another party? Or would he denounce them?
On the national stage, Democrats have been accused of losing touch with working-class Americans. They have been accused of pursuing boutique causes, of slavish adherence to group-identity politics and of courting elitists at the expense of middle-class values.
Guilty as charged, and the López Rivera case is a perfect homegrown example. It’s the same phenomenon of ignoring the concerns of working families, only this time the boutique cause is a convicted terrorist.
Cuomo clearly has national ambitions, and the Democratic Party is looking for leaders to save it from oblivion. This would seem, then, the perfect time for the governor to mount his bully pulpit and demand that the mayor join the boycotters unless the parade rescinds its award to López Rivera.
Or have Democrats become so addicted to ethnic pandering that even denouncing terrorism is forbidden?
Source>http://nypost.com/2017/05/30/todays-democrats-have-no-problem-embracing-known-terrorists/
Posted by theodore miraldi at 7:31 AM