Well, no, but a Trump speech triggers another overwrought uproar. 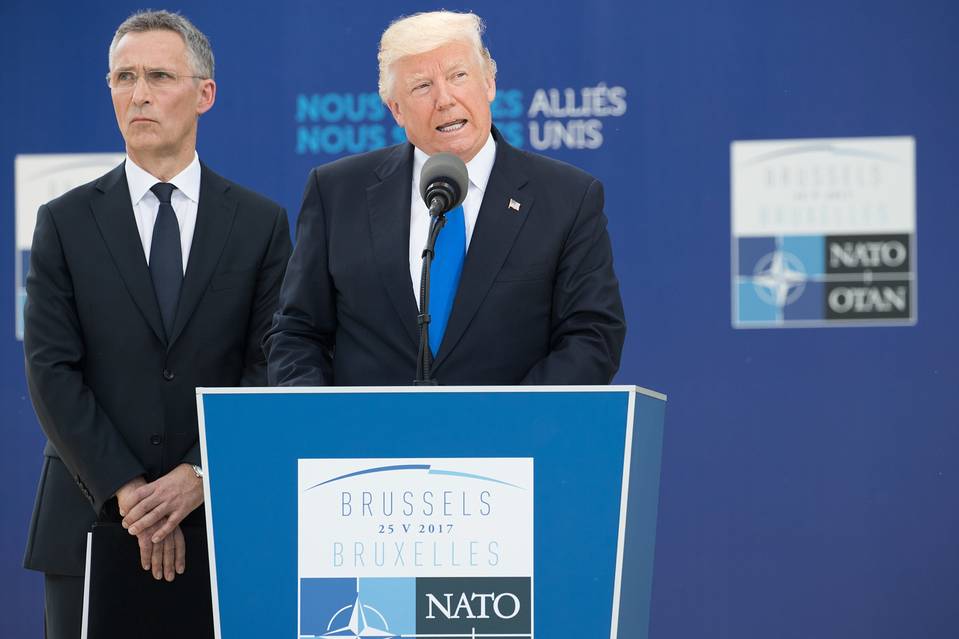 WSJ
Donald Trump creates many of his own problems, but sometimes he can’t win no matter what he does. Consider the uproar on Thursday because the President supposedly did not explicitly endorse NATO’s Article 5 commitment that an attack on one ally is an attack on all.
Nicholas Burns, a Harvard professor and beating heart of the U.S. diplomatic establishment, followed Mr. Trump’s speech with a Twitter barrage that included: “Every US President since Truman has pledged support for Article 5—that US will defend Europe. Not so Trump today at #NATO. Major mistake.” The herd of independent media minds then stampeded with the theme that Mr. Trump had deliberately failed to commit the U.S. to defending Europe against attack.
But is that really what happened? Mr. Trump was speaking, briefly, at an event at NATO headquarters in Brussels unveiling the Article 5 and Berlin Wall Memorials. The Article 5 Memorial commemorates the only time that NATO has triggered Article 5, which came after al Qaeda’s attack on the U.S. on 9/11. The Memorial includes a remnant of the World Trade Center’s North Tower.
Here is what Mr. Trump said in the third paragraph of his speech: “This ceremony is a day for both remembrance and resolve. We remember and mourn those nearly 3,000 innocent people who were brutally murdered by terrorists on September 11, 2001. Our NATO allies responded swiftly and decisively, invoking for the first time in its history the Article 5 collective defensive commitments.”
So let’s see: By speaking at an event commemorating Article 5, and explicitly citing and praising Article 5’s invocation on 9/11, Mr. Trump was really trying to send a message that he doesn’t believe in Article 5? Who knew Mr. Trump was capable of such messaging subtlety?
Mr. Trump did follow his reference to Article 5 with blunt demands for NATO burden sharing. Critics say this implied that the U.S. won’t come to Europe’s defense until all of NATO’s members spend at least 2% of their national GDP on the military, as NATO’s guidelines demand.
But if that’s what he was trying to say, consider Mr. Trump’s reference in his speech that “the NATO of the future must include a great focus on terrorism and immigration, as well as threats from Russia and on NATO’s eastern and southern borders.” The reason that Article 5 was included in the NATO charter in the first place is the threat from Russia, and Mr. Trump mentioned that threat.
Mr. Trump started his credibility problem on NATO with his campaign comments that the alliance was “obsolete.” We criticized him at the time. But as President he has walked at least 90% of that back—by supporting Montenegro’s entry into the alliance despite Russia’s furious opposition; by following through with new NATO deployments on the alliance’s eastern front, including a U.S.-led battalion; and this week with a new NATO commitment to join the coalition against Islamic State.
It’s fair to whack Mr. Trump if he indulges his many bad instincts, but it serves no one other than Vladimir Putin to suggest without evidence that the U.S. won’t honor its NATO commitments—or to drive a wedge between allies simply to make Mr. Trump look bad.
Source>https://www.wsj.com/articles/trump-sells-out-nato-1495755471
Posted by theodore miraldi at 11:25 AM