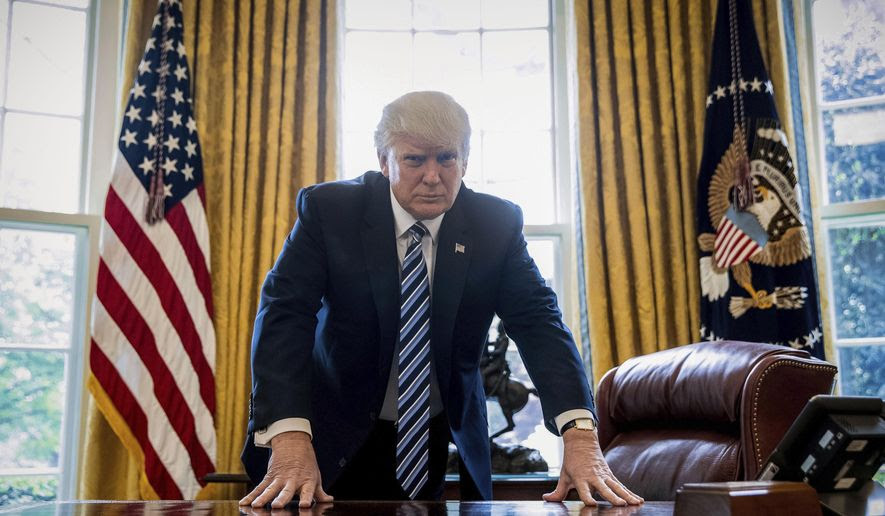 
President Trump is laying the groundwork for withdrawing from the Paris climate agreement, launching a process that is likely to take some years.
The details of the withdrawal are still in the works and the effort is being led by Environmental Protection Agency Administrator Scott Pruitt, according to Axios, which reported Wednesday on the direction the administration is taking.

Donald J. Trump  ✔@realDonaldTrump
I will be announcing my decision on the Paris Accord over the next few days. MAKE AMERICA GREAT AGAIN!

Twitter Ads info & Privacy
A source told The Washington Times different options for withdrawal are being explored, but that no final decision to withdraw has been reached.


The agreement was the centerpiece of President Obama’s international agenda, and was meant to tie the U.S. to certain targets for greenhouse gas emissions, as part of an international deal. But Mr. Obama refused to submit the deal to the Senate for ratification as a treaty, instead insisting it was a presidential accord that amounted to pressure, but not to a binding treaty.
The new administration has fiercely battled over what to do about the agreement, which then-candidate Trump promised to cancel during the campaign.
State Department officials — many of them holdovers from the Obama era — fought to stay in the agreement, and were aided by new Secretary of State Rex Tillerson and Mr. Trump’s own family.
Leading the withdrawal charge were Mr. Pruitt and top Trump adviser Stephen K. Bannon. The White House’s top lawyer, Donald McGahn, also ended up tilting against the agreement.
Mr. Trump spent much of last week meeting with European leaders, who pressured him to remain in the deal. Pope Francis also added his voice to the pressure, even given the president a copy of the papal encyclical urging the world to battle climate change.
Sen. Mike Lee, who advocated for a full withdrawal from the climate agreement, said that binding the U.S. to an international agreement was a bad idea because other countries will not uphold their end of the agreement.
“When the United States commits to something it abides by the rule of law. When other countries do the same it doesn’t necessarily have the same effect,” said the Utah Republican on MSNBC.
“When we tie ourselves to an agreement internationally, we know that other agreements might not abide by their limits. When we ourselves tie them to it we know that we will to ours. I’d hate to see us harm our own economy by agreeing to something that other people, who we agree with, aren’t going to follow.”
Sen. Richard Blumenthal disagreed and said pulling out of the agreement will undermine America’s credibility, and fall behind in job creation in solar and other environmental technology.
“I think that our credibility will be undermined,” said the Connecticut Democrat on CNN. “If other countries lose confidence in our commitment to climate change, they may cut back their commitment. They’re going to fill the gap. China now is producing jobs and economic progress based on solar and wind investments. Other countries will in effect create more jobs and similarly surpass us.”
Michael Brune, executive director of the environmentalist Sierra Club, denounced the decision.
“Donald Trump has made a historic mistake which our grandchildren will look back on with stunned dismay at how a world leader could be so divorced from reality and morality,” he said in a statement. “Trump has abandoned the standard of American leadership, turned his back on the what the public and the market demand, and shamelessly disregarded the safety of our families just to let the fossil fuel industry eek out a few more dollars in profits.”
The Obama administration filed its “acceptance” of the agreement in September, committing the U.S. — at least on paper — to reduce its emissions in 2025 by 26 to 28 percent below the level they were at in 2005.
Mr. Obama had previously tried to win a carbon-emissions control scheme from Congress, so he instead issued a series of regulations imposing tight controls, hoping to force the economy to reach the targets that way.
The Trump administration has already signaled its rollback of many of those key regulatory steps, so even if the U.S. remains in the Paris agreement it would be difficult to force changes in the economy.
The League of Conservation Voters spewed invective at the Trump administration Wednesday, calling the reported decision “a new low” and a “wildly irresponsible decision,” saying it “prioritized polluter profits over kids’ health.”
“With or without U.S. leadership, other countries, businesses, states, cities and citizens are continuing the unstoppable march toward the clean energy economy,” said Gene Karpinski, president of the LCV.
Environmentalists are hoping that businesses are either already locked into lower-emissions decisions, or choose to follow that path because of market or public relations pressures.
Source>http://www.washingtontimes.com/news/2017/may/31/donald-trump-exit-paris-climate-accord/
Posted by theodore miraldi at 1:21 PM