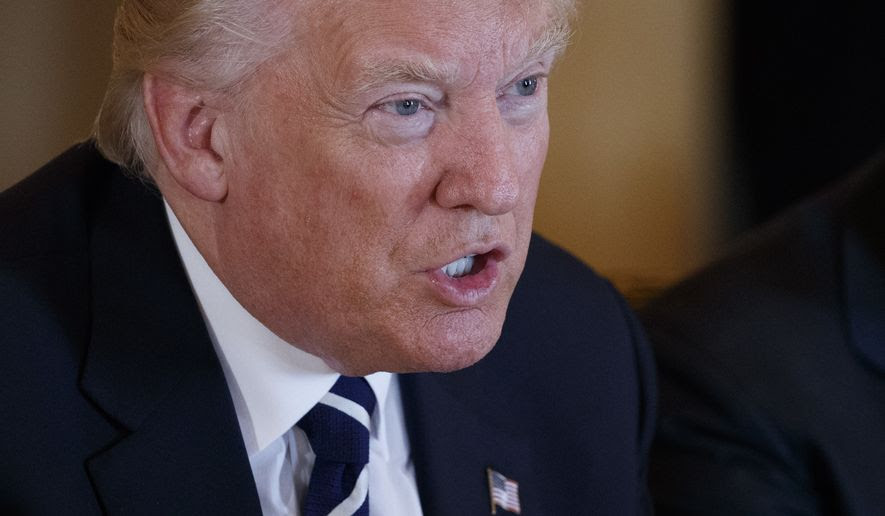 
President Trump’s plan to rebuild America’s roads, bridges, seaports and airports was supposed to be one of the few areas ripe for bipartisan cooperation, but it got raspberries from Capitol Hill Democrats when presented as a $200 billion budget priority.
The infrastructure program in the budget was as much a proposal to reform federal bureaucracy as a plan to spend taxpayer dollars, and it quickly became another Trump vs. Washington showdown.
Mr. Trump has made rebuilding U.S. transportation, industrial and energy infrastructure a top priority of his presidency. To accomplish the goal without massive deficit spending, he proposed using taxpayer money to leverage $1 trillion of investment by states, local governments and the private sector.
He would augment every dollar spent by streamlining permits, overhauling loan and cost-sharing programs, and cracking down on frivolous lawsuits that bog down construction, according to the White House.
Democrats saw a boon for Wall Street and a bust for the Department of Transportation, which would see its funds cut overall by $2.4 billion, or 13 percent, to $16.2 billion next year under the president’s new budget.
“President Trump’s campaign promises on infrastructure are crumbling faster than our roads and bridges,” said Senate Minority Leader Charles E. Schumer, New York Democrat. “The fuzzy math and sleight of hand can’t hide the fact that the President’s $200 billion plan is more than wiped out by other cuts to key infrastructure programs.”
Administration officials counter that the president’s reforms involve as many as 16 different federal agencies and doesn’t being and end with the Department of Transportation.
Simply put, Mr. Trump believes that the federal government can do a better job making strategic, targeted investments in infrastructure to increase the country’s long-term economic competitiveness, officials said.
The deterioration of America’s. highways, waterways and airports are apparent throughout the country. The World Economic Forum ranked U.S. infrastructure 12th, behind countries such as: Japan, Germany, the Netherlands and France.
Still, the White House left itself vulnerable to criticism by detailing spending cuts in the budget but outlining the infrastructure plan in a six-page fact sheet that provided goals and proposals without price tags.
“I found it alternately intriguing and frustrating,” said a Sarah Kline, a transportation policy scholar at the Bipartisan Policy Center.
Ms. Kline was intrigued because it included proposals supported by BPC, such as expediting the permit process and expanding the use of federal tax-exempt bonds for private investment in highway and freight transfer stations.
“It’s frustrating because it doesn’t actually say what the money would be used for,” she said. “I’m desperate for more details.”
Ms. Kline also worried that Mr. Trump was moving to aggressively to transform government.
“One of the things that concern me is it really seems to be pulling back on the role of the federal government and putting the emphasis in local and state government and private sector,” she said. “I’m not sure we are ready for that.”
The president’s plan starts with $5 billion in 2018, as the proposed reforms and new financing programs ramp up. The federal spending would grow to $25 billion the next year, $40 billion in 2020 and peak at $50 billion in 2021.
At the same time, Mr. Trump calls for ending bailouts of the Highway Trust Fund, filling it only with federal gas tax revenue, which would result in a $96 billion cut over 10 years.
Pursuing deep cuts to non-defense spending to help balance the books in 10 years, the budget slashed several current infrastructure programs that rely on federal funds, including DOT grants for transportation and rail projects and Agriculture Department grants for waterways infrastructure.
Mr. Trump also proposed turning the federal air-traffic control system into to an independent, not-for-profit organization.
All these changes met resistance from Democrats and some Republicans on Capitol Hill.
Rep. Bill Shuster, chairman of the House Transportation and Infrastructure Committee, said it was time to embrace innovative ideas but that the proposals required closer review.
“All solutions need to be on the table, because simply continuing with the status quo will not produce the infrastructure improvements our nation needs,” he said.
Capitol Hill Republicans have begun eyeing infrastructure as the next major legislative effort, taking it up sooner if replacing Obamacare and tax reform remain stalled.
The proposals garnered early support from business interests.
Proposing $200 billion in funding and innovative financing approaches is a good start for long-overdue repairs, said David Beaudreau Jr., a senior vice president at D.C. Legislative and Regulatory Services.
“It does look like it is going to be adding a good bit of funding to solve some of the infra problems that plague the nation and it is actually quite innovative in some of the approaches it takes,” he said.
The proposal for an inland waterways trust fund caught his eye.
Shippers and barge operators on the Mississippi River would be open to increased fees if it went to locks and dams that haven’t been upgraded since they were built in the 1930s as part of the New Deal.
Despite the partisan opposition, Mr. Beaudreau was confident there was an opening to pass an infrastructure plan.
“Infrastructure is crumbling and it needs to be fixed. It’s always a question of how to do it, who pays for it and, you know, who can get some credit for it,” he said. “If they are able to really sit down and work this out, it could create a lot of new jobs and opportunity around the country. It’s a matter of getting everybody to sit down and work through these.”
Source>http://www.washingtontimes.com/news/2017/may/24/donald-trumps-infrastructure-budget-ripped-by-demo/
Posted by theodore miraldi at 8:08 AM