Trump’s Presidency Facing Monumental FAILURE Unless He Wises Up PRONTO 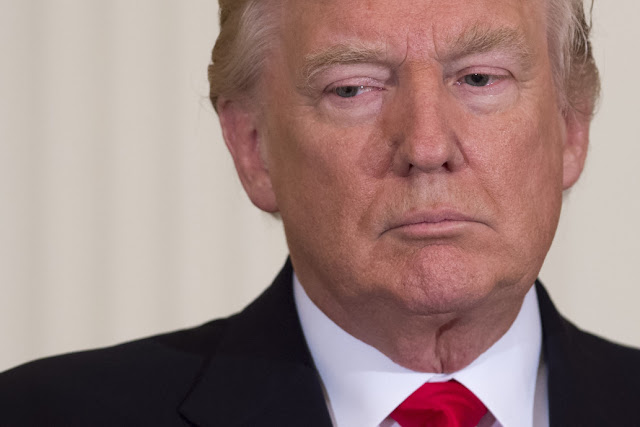 Right now, the very best you can say about Donald Trump is that he stinks at this whole president thing — in large part because he keeps creating trouble for himself and entirely on his own.
Yes, the media are against him. Yes, the Democrats want his scalp. But everyone inclined to indulge President Trump in his self-pity about how he’s being badly treated by others in Washington and badly served by his own staff is ignoring the basic facts of the political situation he is bungling at present like no one has bungled it before.
He just won an election and his party controls both chambers of Congress. If he were any good at this president thing he would be able to convert both of these advantages into facts on the ground — into legislative and procedural successes that would stymie the media attacks and throw Democrats on the defensive.
Instead, it’s his own party that’s on the defensive. It’s his own party that is terrified of acting. It’s his own party that cannot make sense of what he wants. They can do many things for him and he can do many things for them and they don’t and he doesn’t because he’s too busy lighting fires on which he then pours gasoline.
All of a sudden, Washington Republicans are beginning to hightail it in the other direction like the knights of the round table in “Monty Python and the Holy Grail” who scream “run away” when threatened by a frightening rabbit.

He’d better splash some cold water on his face, take a good hard look in the mirror, and realize he’s going to go down in history as a monument to failure unless he wises up and pronto.

This began to happen almost immediately after the story broke at 5 p.m. Tuesday about Trump privately asking the now-fired FBI Director James Comey to “let things go” in the investigation of the then-fired National Security Adviser Mike Flynn. Soon, like other characters in that movie, they will throw him in the river to make sure he’s not a witch.

Let us generously assume for a moment that Trump didn’t mean to interfere with an FBI investigation, which would be an open-and-shut case of obstruction of justice and would almost certainly lead to the serious possibility of his impeachment.
Let’s just say Trump was talking casually about a guy he thought was a good fellow whom he was compelled to fire but whom he still liked and didn’t want to see hurt.
That would be nice, right? It would also be a sign that Trump is a fool.
What, did Trump think Comey just fell off a turnip truck and wouldn’t be taking notes on what Trump said to him? Did he think Comey had climbed to the top of the greasy pole without possessing the classic survival skills of a successful bureaucrat?
And, having had this conversation with Comey, what on earth would then lead Trump to fire the man with whom he had had such a stupidly casual conversation about a sensitive investigation?
Isn’t this the sort of thing about people that a seen-it-all dealmaker is supposed to know better than the ordinary politicians who make such terrible deals we Americans felt compelled to bring in a famous businessman to fix what’s broken?
We can make the same generous and damning presumptions about him letting certain intelligence secrets out of the bag to the Russian foreign minister. He didn’t mean ill; he was just talking.
STOP TALKING.
It’s only 117 days into a presidency that is supposed to last, at a minimum, 1,460. But after the gobsmacking self-inflicted wounds of the past two days, it doesn’t seem unreasonable for the first time to wonder whether he’s already served a majority of the days he’s likely to serve.
Trump is a septuagenarian, and it’s said that people of his age do not change. Maybe not. But he doesn’t have a choice. He’d better change. He’d better holster the guns with which he is shooting himself almost daily in the feet. He’d better splash some cold water on his face, take a good hard look in the mirror, and realize he’s going to go down in history as a monument to failure unless he wises up and pronto.
He’d better save himself, because ain’t nobody else gonna save him.
Source>http://nypost.com/2017/05/17/trumps-presidency-facing-monumental-failure-unless-he-wises-up-pronto/
Posted by theodore miraldi at 7:03 AM