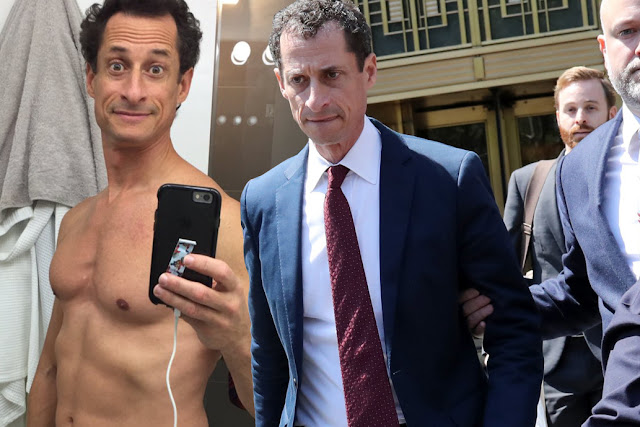 “I have a sickness but I do not have an excuse,” Weiner told Manhattan federal Judge Loretta Preska.
Weiner, 52, said he hit “bottom” last fall before entering into outpatient therapy for sex addiction.
Weiner pleaded guilty to a single count of transferring obscene material to a minor as part of a plea agreement with the US Attorney’s Office in Manhattan. He must register as a sex offender.
He also agreed to forfeit his iPhone as part of the deal.
Weiner admitted that in 2016, he started up an online relationship with the North Carolina teen “who said she was a high school student” after she contacted him online.
“I knew that was morally wrong,” Weiner said, breaking down in tears.
The charge carries up to 10 years in prison but prosecutors are calling for Weiner to be sentenced to between 21 and 27 months. Ultimately, the judge will decide Weiner’s punishment.
Weiner was joined in the courtroom by his restaurateur brother, Jason.
But his wife, Huma Abedin, a longtime aide to Hillary Clinton, was nowhere in sight.
Weiner must post a $150,000 bond before he can walk free and surrendered his passport.
Feds launched an investigation into Weiner’s lurid behavior after the teen told the Daily Mail that she and Weiner carried on an online relationship between January and July 2016.
Weiner’s relentless sexting scandals derailed his political career, starting when he resigned from Congress in 2011 after pictures of his privates ended up on Twitter.
His comeback bid for New York mayor in 2013 was torpedoed after a woman named Sydney Leathers came forward about raunchy messages he sent her under the pseudonym “Carlos Danger.”
He also was busted for sending a woman pictures of his crotch in 2015 — with his then-3-year-old son in bed next to him.
Weiner’s sentencing is set for Sept. 8.
Source>http://nypost.com/2017/05/19/anthony-weiner-sobs-to-judge-i-have-a-sickness-but-i-do-not-have-an-excuse/
Posted by theodore miraldi at 3:05 PM