What is Robert Mueller Investigating (Since COLLUSION is NOT a CRIME)? 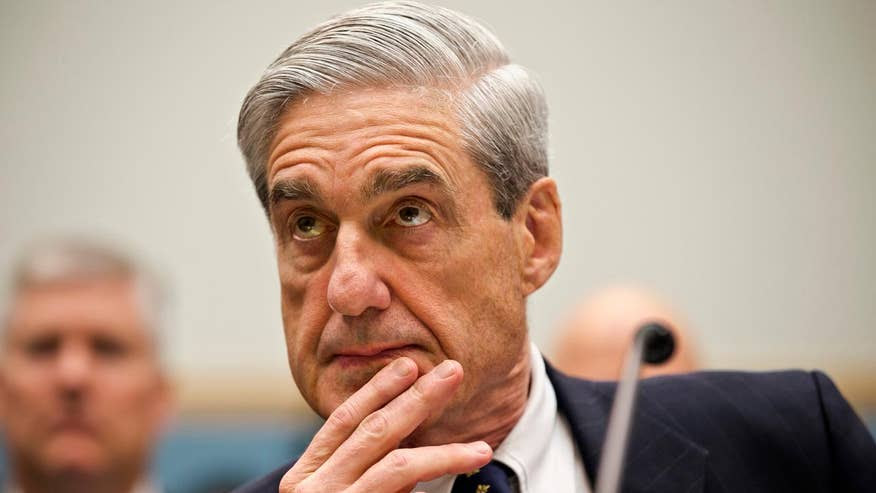 Robert Mueller is tasked with finding a crime that does not exist in the law.  It is a legal impossibility.
As special counsel, Mueller can engage in all manner of spectacular jurisprudential gymnastics.  However, it will not change the fact that colluding with Russia is not, under America’s criminal codes, a crime.  It’s just not there.
Maybe it should be.  Perhaps someday Congress will pass a law criminalizing such conduct in political campaigns.  But for now, there is not a single statute outlawing collaboration with a foreign government in a U.S. presidential election.  Or any election, for that matter.
Why, then, are so many people who are following the Trump-Russia saga under the mistaken impression that collusion is a crime?  Principally, because it is a loaded word with an historic criminal connotation.
“Collusion” became a prominent part of the legal lexicon when Benjamin Harrison occupied the White House and Congress passed the Sherman Antitrust Act in 1890 outlawing collusion in some business practices.  Specifically, price fixing and other anticompetitive activities became a criminal offense under Section 1 of the Act.  Almost overnight, the word “collusion” was converted into a legal pejorative.
But collusion is only criminal in an antitrust setting.  It has nothing whatsoever to do with elections.  Yet that has not stopped politicians, pundits and journalists from either misunderstanding the concept and/or misconstruing its application to the Trump-Russia hysteria that has reached a deafening pitch.
Both the Department of Justice and the FBI seem equally oblivious.
Mueller’s Marching Orders
Under the law granting him legal authority (28 CFR 600), a special counsel is charged with investigating crimes.  Only crimes.  Nothing else.  He has limited jurisdiction.  Any other wrongdoing uncovered in the investigation which does not rise to the level of a criminal offense cannot even be made public by the special counsel.  That is the law.
So what crime is Mueller instructed to investigate?  Let take a look.
In his order appointing Mueller as special counsel (Order No. 3915-2017), Acting Attorney General Rod Rosenstein directed him to investigate “any links and/or coordination between the Russian government and individuals associated with the campaign of President Donald Trump”.
But wait.  If Mueller is supposed to look for evidence of a crime that is not, by legal definition, a crime…then isn’t the special counsel being asked to do something that is manifestly unattainable?   Doesn’t the impossibility of his assignment render the exercise futile?  The answer is yes.
The only conceivable crime is a tangential one.  If it could somehow be shown that someone in the Trump campaign aided and abetted the hacking of the Democratic National Committee or the campaign of Hillary Clinton, then perhaps a criminal charge might be made.  But as Harvard Law professor Alan Dershowitz told Fox News, “I’m sure that didn’t happen”.
How can he be so sure?  Common sense.  There is no evidence the Trump campaign had the technical expertise to hack anything.  Knowing about a computer theft or even verbally encouraging it is not enough under the law.  It requires an overt act that assists in the commission of the crime.  It appears that no one, including the Trump campaign, even knew about Russia’s hacking efforts until after they were accomplished and made public.
Any Related Matters
Rosenstein’s order to the special counsel authorizes him to investigate “anyother matters that arose or may arise directly from the investigation.”   This is the usual all-encompassing phrase which allows a special counsel to run rampant in an almost limitless direction to dig up dirt on potential targets.
As I pointed out in a recent column, Mueller’s probe will inevitably morph into an investigation of President Trump’s meeting with James Comey and his subsequent firing of the FBI Director.  Amid partisan accusations of obstruction of justice, the special counsel will surely examine whether the president corruptly attempted to influence, obstruct, or impede the due administration of the law, as the law defines it.  (18 USC 1501)
If the president told Comey he hopes former National Security Adviser Michael Flynn can be cleared because “he’s a good guy,” it is not enough to sustain an obstruction charge.  Hoping or wishing for an outcome is not the same as influencing, obstructing or impeding.  Nor is firing the FBI Director.  As Comey himself admitted, the president has the constitutional authority to fire him for any reason or no reason at all.
Furthermore, the term “corruptly” is specifically defined under18 USC 1515(b) as “acting with an improper purpose, including making a false or misleading statement, or withholding, concealing, altering, or destroying a document or other information.”  The president’s actions do not come close to satisfying the requirements of acting corruptly.
The most recent accusation is that President Trump asked two of his top intelligence officials, Daniel Coats and Adm. Michael Rogers, to publicly deny the existence of any evidence of collusion during the 2016 election.  If Rogers and Coats had no such evidence of collusion, then asking them to tell the truth is not illegal.  But at this point, we do not know what exactly occurred during those alleged conversations.
What we do know is that collusion in a political campaign is not, by itself, a crime.
How, then, is it possible to obstruct the investigation of a crime… which is not a crime?
Source>http://www.foxnews.com/opinion/2017/05/23/gregg-jarrett-what-is-robert-mueller-investigating-since-collusion-is-not-crime.html
Posted by theodore miraldi at 6:07 PM