Zuckerberg Calling for GOVERNMENT to Give EVERYBODY Free Money 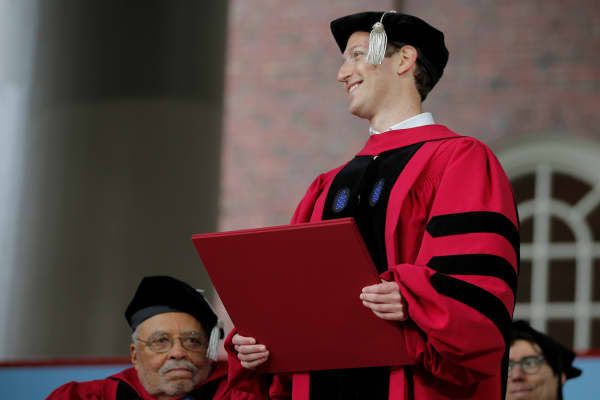 Zuckerberg: We should explore ideas like universal basic income  17 Hours Ago | 02:58

Todd Haselton
Facebook CEO Mark Zuckerberg called on the need to consider universal basic income for Americans during his Harvard Commencement Speech.
Zuckerberg's comments reflect those of other Silicon Valley bigwigs, including Sam Altman, the president of venture capital firm Y Combinator.
"Every generation expands its definition of equality. Now it's time for our generation to define a new social contract," Zuckerberg said during his speech. "We should have a society that measures progress not by economic metrics like GDP but by how many of us have a role we find meaningful. We should explore ideas like universal basic income to make sure everyone has a cushion to try new ideas."
Zuckerberg said that, because he knew he had a safety net if projects like Facebook had failed, he was confident enough to continue on without fear of failing. Others, he said, such as children who need to support households instead of poking away on computers learning how to code, don't have the foundation Zuckerberg had. Universal basic income would provide that sort of cushion, Zuckerberg argued.
Altman's view is similar. A year ago, Altman said he thinks "everyone should have enough money to meet their basic needs—no matter what, especially if there are enough resources to make it possible. We don't yet know how it should look or how to pay for it, but basic income seems a promising way to do this." Altman believes basic income will be possible as technological advancements "generate an abundance of resources" that help decrease the cost of living.
Source>http://www.cnbc.com/2017/05/25/mark-zuckerberg-calls-for-universal-basic-income-at-harvard-speech.html
Posted by theodore miraldi at 9:57 AM