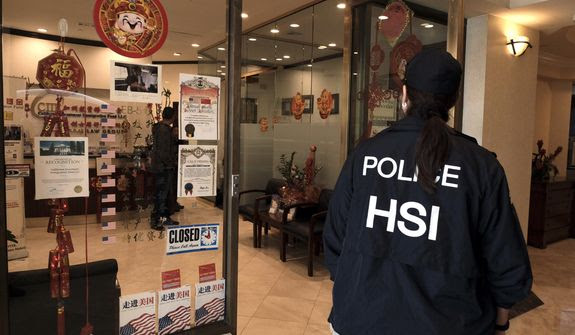 
Most illegal immigrants who pay taxes have stolen someone else’s legal identity, and the IRS doesn’t do a very good job of letting those American citizens and legal immigrants know they’re being impersonated, the tax agency’s inspector general said in a new report released Thursday.
The theft creates major problems for the American citizens and legal foreign workers whose identities are stolen, and who have to deal with explaining money they never earned.
But the IRS only manages to identify half of the potentially 1.4 million people likely affected by the fraud in 2015, the Treasury Inspector General for Tax Administration said in its report.
“Cases of employment identity theft can cause significant burden to innocent taxpayers, including the incorrect computation of taxes based on income that does not belong to them,” said J. Russell George, the inspector general.
It’s long been a conundrum in the federal government.
The IRS knows of 2.4 million people a year who file taxes using an Individual Taxpayer Identification Number, which is generally given out to immigrants who aren’t authorized to work. But the IRS is not allowed to talk with Homeland Security to help agents identify who and where those taxpayers are.
The migrants file their forms with their ITINs, but the W-2 forms they submit show valid Social Security numbers that they fraudulently gave to their employer to clear an initial work authorization check.
A staggering 87 percent of forms filed online using ITINs showed income credited to a Social Security number. More than half of forms filed by paper also showed that same fraudulent behavior.
The IRS tries to mark the files of the fraud victims when electronic filings are used. But the tax agency misses about half of the victims, the inspector general said.
For paper forms, the IRS did even worse, the audit found.
The tax agency, in its official reply to the report, insisted it takes identity theft “very seriously.”
Kenneth C. Corbin, commissioner of the IRS’s wage and investment division, said it has just completed a pilot program to figure out how to notify taxpayers they’re the victims of fraud.
But he said in most of the cases they’re missing right now, the Social Security number given is for someone who doesn’t have a tax account on their system. He said they can’t create a notification for someone who’s not in their files, and said because of privacy concerns they won’t just send a notification to the addresses listed.
He also said there are cases where someone knowingly loaned out their Social Security to an unauthorized worker, and thus wasn’t properly a victim but a conspirator.
The IRS agreed to some of the inspector general’s recommendations but refused others. Mr. Corbin said the IRS would do what it could, but pleaded poverty, saying the agency has “limited resources.”
“We cannot commit to additional actions that would require significant resources to accomplish,” he wrote.
Source>http://www.washingtontimes.com/news/2017/jun/22/14-million-illegals-working-stolen-social-security/
Posted by theodore miraldi at 8:36 PM