After Chinese & Russian Hack Before Election, Obama Did NOTHING!

We were Hacked by both China and Russia leading up to the Election and the Obama Administration literally did NOTHING to SECURE Government Servers. WHY?...tmiraldi. 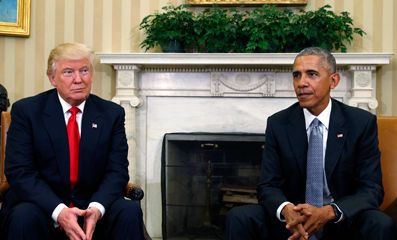 President Trump criticized his predecessor for allegedly doing “nothing” about reports that Russia interfered in last year’s presidential campaign, in a recent interview.
“I just heard today for the first time that (former President) Obama knew about Russia a long time before the election, and he did nothing about it,” Trump said in the interview set to air Sunday on “Fox & Friends Weekend.” “The CIA gave him information on Russia a long time before the election. … If he had the information, why didn't he do something about it?”
Trump suggested the media has unreported the story, while has rigorous pursued allegations that his team colluded with Russia during the 2016 race, in which he upset Democrat candidate Hillary Clinton.
The wide-ranging interview followed Trump’s signing of the VA Accountability Law on Friday and included such topics as Democrats’ so-called Trump Resistance Movement.
“I think it's a terrible theme in terms of getting elected,” the president said. “And more importantly, I think it's a terrible theme for the people of this country. Resist, obstruction. That's not what they want.”
Trump, who made helping military veterans part of his July 2015 Republican presidential campaign announcement, also said he “always felt the veterans weren't given a fair shake.”
“They've gone through so much, and I've always felt they were never appreciated the way they should be appreciated,” the president said. “But you know who appreciates?  The voters, and I'm not just talking about them as block, which is a big block.  But I'm talking about the voters outside of the veterans.”
Source>http://www.foxnews.com/politics/2017/06/24/trump-questions-why-obama-allegedly-did-nothing-about-russia-hacking-in-fox-interview.html
Posted by theodore miraldi at 3:19 PM