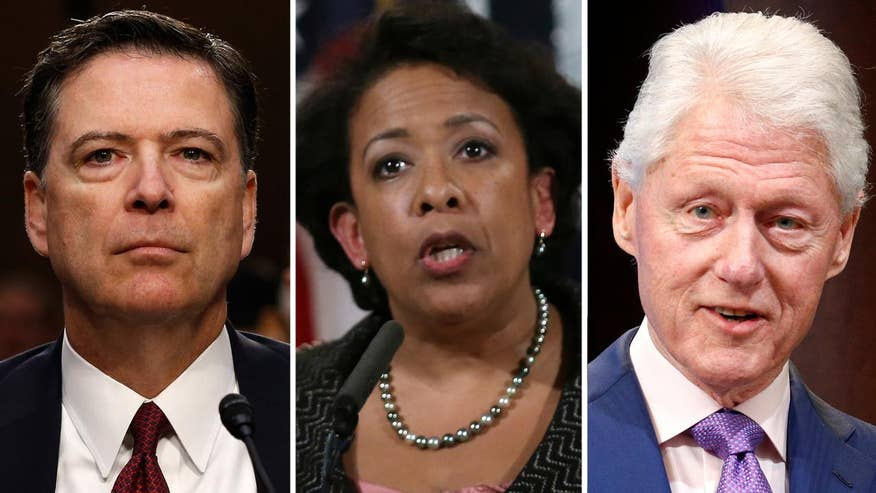 Former FBI Director James Comey reportedly told members of Congress that he had a “frosty” exchange with former Attorney General Loretta Lynch last year when he discussed her possible interference in the FBI’s investigation into Hillary Clinton’s private email server.
Circa reported that in a closed session following Comey’s testimony before the Senate Intelligence Committee last Thursday, the fired FBI director told lawmakers he confronted Lynch over a sensitive document reportedly suggesting she had agreed to stop any Clinton prosecution.
During the closed-door conversation, Comey reportedly told lawmakers Lynch looked at the document and then looked up with a “steely silence” -- and directed Comey to leave her office.
In the open session before the Intelligence Committee, Comey said that Lynch directed him to describe the Clinton email probe as a “matter” and not an “investigation.” Comey also said that the directive, combined with Lynch’s unusual Arizona tarmac meeting with former President Bill Clinton, led him to make his independent announcement regarding the Clinton email probe last July.
Comey testified that the tarmac meeting was a “deciding factor” in his decision to act alone to update the public on the Clinton email probe—and protect the bureau’s reputation.
“There were other things, significant items,” he added, citing how “the Attorney General directed me not to call it an investigation and call it a matter—which confused me.”
“That was one of the bricks in the load that I needed to step away from the department,” Comey said, later adding he was concerned Lynch was trying to align the DOJ’s comments with the way the campaign was talking about the probe. “That gave me a queasy feeling,” he said.
On Wednesday, Chairman of the Senate Judiciary Committee Chuck Grassley, R-Iowa, sent a letter to committee Ranking Member Dianne Feinstein, D-Calif., and said the committee will pursue investigations into any efforts to influence FBI investigations.
Source>http://www.foxnews.com/politics/2017/06/14/comey-reportedly-confronted-lynch-over-clinton-email-probe-involvement.html
Posted by theodore miraldi at 7:43 PM