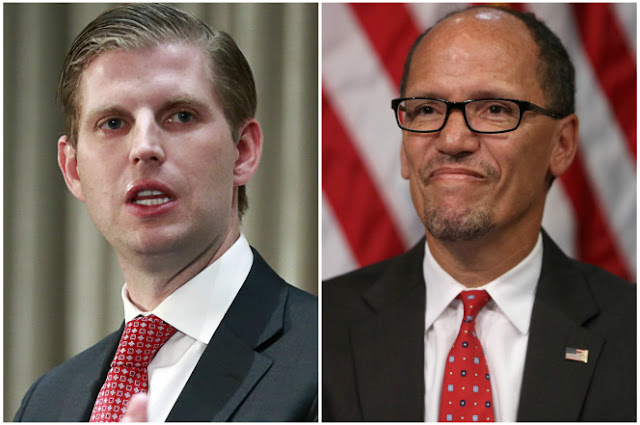 
WASHINGTON – President Trump’s middle son went after Democratic National Committee chairman Tom Perez on Sunday, disparaging the former Labor Secretary as a “nut job.”
“The DNC is half defunct, they got no money in the bank. They have no operation,” Eric Trump told Fox News’ “Sunday Morning Futures.” “You look at the head of the DNC, he’s quite frankly a nut job.”
Eric Trump, who is running the family’s real estate business and technically not part of the political operation, echoed his father’s disdain for the Democrats.
“What are they running on? All they are doing is obstructing and it is clearly not working because every race that comes along, every special election that comes along, my father is winning,” Trump said.
The president used “nut job” to describe fired FBI Director James Comey to Russian officials during a meeting in the White House last month.
“I just fired the head of the FBI. He was crazy, a real nut job,” he told Russian foreign minister Sergei Lavrov and Ambassador Sergey Kislyak, according to reports.
It’s not the first time Eric Trump has went after Perez.
He previously called him “whack job” and said Democrats are “not even people.”
Also Sunday, Eric, 33, blasted social media attacks directed at his pregnant wife, Lara, and younger siblings, Tiffany, 23, and Barron, 11.
“I can’t even say them on the air they’re so ghastly. … There are no borders for these people,” Trump, executive VP of the Trump Organization, said.
Source>http://nypost.com/2017/06/25/eric-trump-dnc-chairman-is-a-nut-job/
Posted by theodore miraldi at 5:39 PM