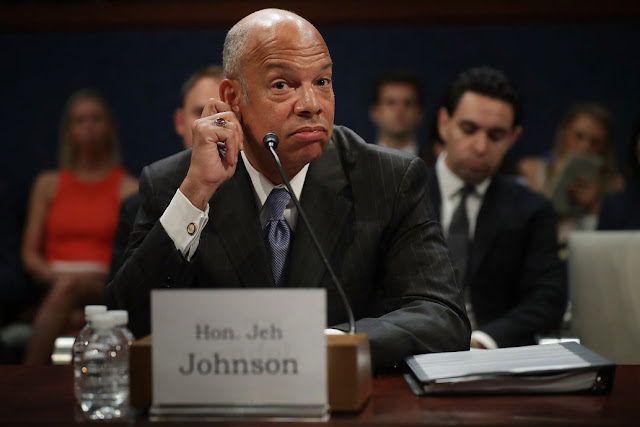 
Ex-Homeland Security Secretary Jeh Johnson’s testimony Wednesday should mark the definitive end of “Russia hacked the election” hysteria. Too bad it took so long to get to this point.
Johnson told the House Intelligence Committee outright that the Russians failed to alter “ballots, ballot counts or reporting of election results.”
Yes, it’s clear Russia (with Vladimir Putin’s full approval) orchestrated cyberattacks designed to influence the 2016 contest, and also pushed fake news.
But the hack, and release via WikiLeaks, etc., of Democratic e-mails produced nothing game-changing. The biggest impact was to confirm the obvious: The Democratic National Committee favored Hillary Clinton from the start.
And fake news mainly feeds people’s existing prejudices — which serves Putin’s goal of undermining our democracy, but fails to flip votes from one party to the other.
Johnson also made it plain that Democrats didn’t take the problem too seriously: “The FBI and the DNC had been in contact with each other months before about the intrusion, and the DNC did not feel it needed DHS’s assistance at that time.”
Johnson also explained why the Obama administration kept quiet on the threat. The White House, he recalled, argued that a public admission of possible Russian interference might be seen as an effort to influence the election — particularly since Donald Trump was warning “the election was going to be rigged.”
That is: Because Obama was fervently campaigning for Clinton, the White House figured that raising alarms about Russian interference would seem mere electioneering.
Was it more worried that this would undermine faith in the election, or just that it would help Trump? Note that Team Obama vetoed then-FBI Director James Comey’s plan to publish a late-summer op-ed warning of Russia’s efforts to interfere — which would’ve been the least political-seeming way to get the message out.
Also that when Team Obama finally did go public on the threat, it was after that “Access Hollywood” tape seemed to spell disaster for Trump.
And that the administration didn’t take action until after Election Day, when it slapped Moscow with new sanctions — putting the question of Russian interference on Page One only after Trump had won.
It’s good that the hysteria has finally died down, but too bad Team Obama’s handling of it all helped produce so much misdirected hysteria in the first place.
Source>http://nypost.com/2017/06/21/good-riddance-to-the-russia-myth-and-blame-team-obama-for-promoting-it/
Posted by theodore miraldi at 7:28 AM