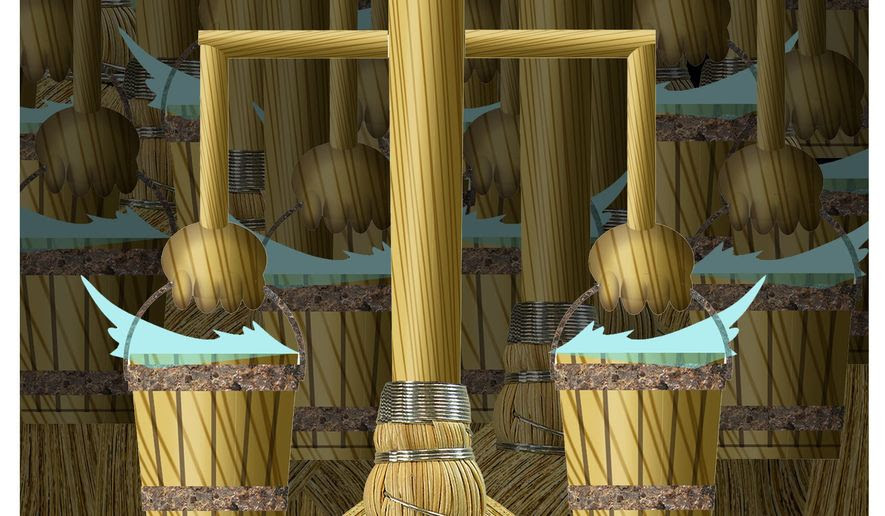 Illustration on duplication in government programs by Alexander Hunter


Is there anyone who can point to the “Affordable Care Act” (aka Obamacare) and credibly claim it is accomplishing the goals set for it seven years ago?
Insurers are pulling out of the exchanges, premiums and related costs are going up, not down, as supporters of the misnamed law claimed they would. Many people who like their doctors are not being allowed to keep their doctors.
In a Facebook post last week, Barack Obama himself didn’t even bother to defend Obamacare. Instead, he criticized a proposed replacement, calling the Senate bill written by Republicans “a massive transfer of wealth from middle-class and poor families to the richest people in America.”
Leaving aside whether the poor, and much of the middle class, have any wealth to transfer, much less to meet their own needs, who would know more about a massive transfer of wealth than Mr. Obama, whose own health care law is attempting to do just that?
In a statement following the release of a summary of the Senate Republican bill, Majority Leader Mitch McConnell, Kentucky Republican, said: “In the coming days, we expect to receive a budget estimate on our plan. After that, we will proceed with a robust debate and an open amendment process on the Senate floor. I hope every senator engages. Senate Democrats may not have wanted to work with us in a serious way to address Obamacare’s failures before, but I hope they will take this opportunity to do what’s right for the American people now.”
Good luck with that. In our politically polarized atmosphere, even a “Good morning” from a member of the opposition party might provoke a “says who?” response.
In business and in virtually every other area of life, when something doesn’t work, most people would suggest trying another path. Not in Washington where failure is just another opportunity to spend more money. Here, it’s all about intentions, feelings and appealing to “the base,” not accomplishments. If your intention in supporting Obamacare was to fix what is wrong with health care, that is all that matters, not whether your fix worked.
One senator is trying to solve a related problem that could serve as a model for his colleagues when it comes to a new health care bill. Sen. Mike Enzi, Wyoming Republican, who chairs the Budget Committee, wants to end duplicative government programs, along with unauthorized spending on programs whose legislative authority has expired. Mr. Enzi estimates duplicative government programs are costing taxpayers $310 billion and counting.
According to figures supplied to me by Mr. Enzi’s office, there are hundreds of laws that duplicate each other. Comptroller General Gene Dodaro told a Senate panel in April that a Government Accountability Office (GAO) report found 645 ideas in 249 areas that would reduce or eliminate overlapping and duplicative programs. So far, Mr. Dodaro testified, “51 percent have been implemented, 31 percent partially implemented and 18 percent not implemented.” More needs to be done.
The biggest challenge may be reducing unauthorized spending. Mr. Enzi says some spending is on “auto-pay” with some programs not having been re-authorized in 30 years. No wonder Ronald Reagan once quipped: “No government ever voluntarily reduces itself in size. Government programs, once launched, never disappear. Actually, a government bureau is the nearest thing to eternal life we’ll ever see on this earth!”
Taxpayers are paying for 158 science, technology, engineering and math programs, and nearly 700 energy initiatives, according to the GAO. Mr. Enzi wants to restore the historical link between authorizations and appropriations.
The real scandal in Washington has nothing to do with Russia. It is overspending, overtaxing and overreaching government. All of these programs, along with health care and unauthorized spending, can be fixed. All it takes is willpower and goodwill, two characteristics that are sorely lacking in Washington. While attention is focused on restructuring health insurance, Mr. Enzi is trying to highlight another problem that could save billions. His colleagues should listen and act.
Source>http://www.washingtontimes.com/news/2017/jun/26/obamacare-repeal-effort-shows-old-program-is-waste/
Posted by theodore miraldi at 7:46 AM