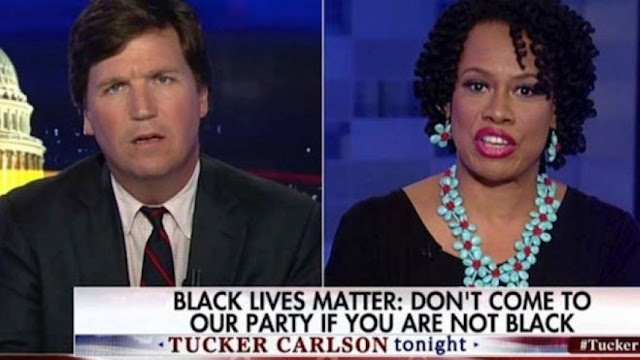 A New Jersey college professor who appeared on “Tucker Carlson Tonight” to defend a black-only Black Lives Matter event has been fired after the college's president said she made racially insensitive comments on the show, according to reports.
Essex County College in Newark announced Lisa Durden's firing Friday. She taught communications and pop culture classes as an adjunct, the Newark Star-Ledger reported.
On his June 6 show, Carlson and Durden, who is black, got into a heated exchange over the appropriateness of allowing only blacks to attend a Black Lives Matter event in New York City on Memorial Day.
“Listen. What I say to that is boo-hoo-hoo,” she said. “You white people are angry because you couldn’t use your ‘white privilege’ card to get invited to the Black Lives Matter’s all-black Memorial Day celebration! Wow!”
Two days after the show, the school suspended Durden with pay. She addressed the matter with school officials Tuesday, three days before the firing was announced.
College president Anthony Munroe said Friday the Fox News appearance prompted calls from students, faculty and prospective students and their families “expressing frustration, concern and even fear that the views expressed by a college employee with influence over students would negatively impact their experience on the campus.”
He noted that although Durden did not mention her affiliation with the school during the show or claim to be representing its views, "her employment with us and potential impact on students required our immediate review into what seemed to have become a very contentious and divisive issue."
Munroe went further in explaining his reasons for firing Durden in a lengthy statement -- in which he invoked the Rev. Martin Luther King Jr.
"The character of this institution mandates that we embrace diversity, inclusion and unity," he said. "Racism cannot be fought with more racism."
Durden declined comment Sunday when contacted by Fox News.
She has said that she was “publicly lynched” by the school.
On Friday, she told the Star-Ledger that she has received a lot of support from school staff members and students, but compared her experience to a rape victim who is blamed for the crime, and a person who returns from war to a hostile environment.
“I thought it would be a safe place for me,” she told the paper, referring to the college. “I thought when I came home from war, I would be safe.” Instead she said she was fired.
Durden's attorney, Leslie Farber, said she believes her client's free speech rights were violated.
"It is free speech guaranteed by the 1st Amendment of the US Constitution and New Jersey law," Farber told Fox News Sunday.
The attorney said they were considering whether to take legal action in the matter.
The Associated Press contributed this report.
Source>http://www.foxnews.com/us/2017/06/25/college-professor-fired-following-remarks-on-tucker-carlson-tonight.html
Posted by theodore miraldi at 3:04 PM