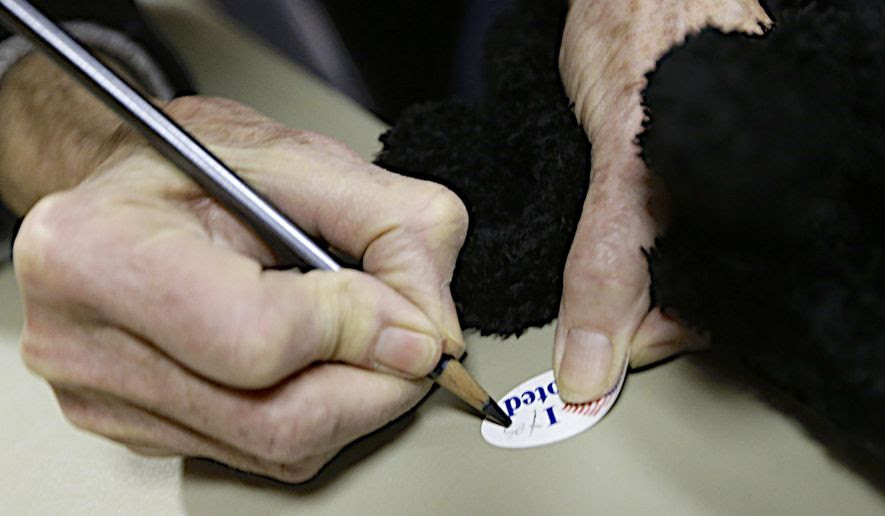 As many as 5.7 million noncitizens may have voted in the 2008 election, which put Barack Obama in the White House, according to research organization Just Facts, (Associated Press/File)


A research group in New Jersey has taken a fresh look at postelection polling data and concluded that the number of noncitizens voting illegally in U.S. elections is likely far greater than previous estimates.
As many as 5.7 million noncitizens may have voted in the 2008 election, which put Barack Obama in the White House.
The research organization Just Facts, a widely cited, independent think tank led by self-described conservatives and libertarians, revealed its number-crunching in a report on national immigration.
Just Facts President James D. Agresti and his team looked at data from an extensive Harvard/YouGov study that every two years questions a sample size of tens of thousands of voters. Some acknowledge they are noncitizens and are thus ineligible to vote.
Just Facts’ conclusions confront both sides in the illegal voting debate: those who say it happens a lot and those who say the problem nonexistent.
In one camp, there are groundbreaking studies by professors at Old Dominion University in Virginia who attempted to compile scientifically derived illegal voting numbers using the Harvard data, called the Cooperative Congressional Election Study.
On the other side are the professors who conducted the study and contended that “zero” noncitizens of about 18 million adults in the U.S. voted. The liberal mainstream media adopted this position and proclaimed the Old Dominion work was “debunked.”
The ODU professors, who stand by their work in the face of attacks from the left, concluded that in 2008 as few as 38,000 and as many as 2.8 million noncitizens voted.
Mr. Agresti’s analysis of the same polling data settled on much higher numbers. He estimated that as many as 7.9 million noncitizens were illegally registered that year and 594,000 to 5.7 million voted.
These numbers are more in line with the unverified estimates given by President Trump, who said the number of ballots cast by noncitizens was the reason he lost the popular vote to Hillary Clinton.
Last month, the president signed an executive order setting up a commission to try to find on-the-ground truth in illegal voting. Headed by Vice President Mike Pence, the panel also will look at outdated voter lists across the nation with names of dead people and multiple registrants.
For 2012, Just Facts said, 3.2 million to 5.6 million noncitizens were registered to vote and 1.2 million to 3.6 million of them voted.
Mr. Agresti lays out his reasoning in a series of complicated calculations, which he compares to U.S. Census Bureau figures for noncitizen residents. Polls show noncitizens vote overwhelmingly Democratic.
“The details are technical, but the figure I calculated is based on a more conservative margin of sampling error and a methodology that I consider to be more accurate,” Mr. Agresti told The Washington Times.
He believes the Harvard/YouGov researchers based their “zero” claim on two flawed assumptions. First, they assumed that people who said they voted and identified a candidate did not vote unless their names showed up in a database.
“This is illogical, because such databases are unlikely to verify voters who use fraudulent identities, and millions of noncitizens use them,” Mr. Agresti said.
He cites government audits that show large numbers of noncitizens use false IDs and Social Security numbers in order to function in the U.S., which could include voting.
Second, Harvard assumed that respondent citizens sometimes misidentified themselves as noncitizens but also concluded that noncitizens never misidentified themselves as citizens, Mr. Agresti said.
“This is irrational, because illegal immigrants often claim they are citizens in order to conceal the fact that they are in the U.S. illegally,” he said.
Some of the polled noncitizens denied they were registered to vote when publicly available databases show that they were, he said.
This conclusion, he said, is backed by the Harvard/YouGov study’s findings of vote data matches for 90 percent of participants but only 41 percent of noncitizen respondents.
As to why his numbers are higher than the besieged ODU professors’ study, Mr. Agresti said: “I calculated the margin of sampling error in a more cautious way to ensure greater confidence in the results, and I used a slightly different methodology that I think is more accurate.”
There is hard evidence outside of polling that noncitizens do vote. Conservative activists have conducted limited investigations in Maryland and Virginia that found thousands of aliens were registered.
These inquiries, such as comparing noncitizen jury pool rejections to voter rolls, captured just a snapshot. But conservatives say they show there is a much broader problem that a comprehensive probe by the Pence commission could uncover.
The Public Interest Legal Foundation, which fights voter fraud, released one of its most comprehensive reports last month.
Its investigation found that Virginia removed more than 5,500 noncitizens from voter lists, including 1,852 people who had cast more than 7,000 ballots. The people volunteered their status, most likely when acquiring driver’s licenses. The Public Interest Legal Foundation said there are likely many more illegal voters on Virginia’s rolls who have never admitted to being noncitizens.
Source>http://www.washingtontimes.com/news/2017/jun/19/noncitizen-illegal-vote-number-higher-than-estimat/
Posted by theodore miraldi at 6:38 AM