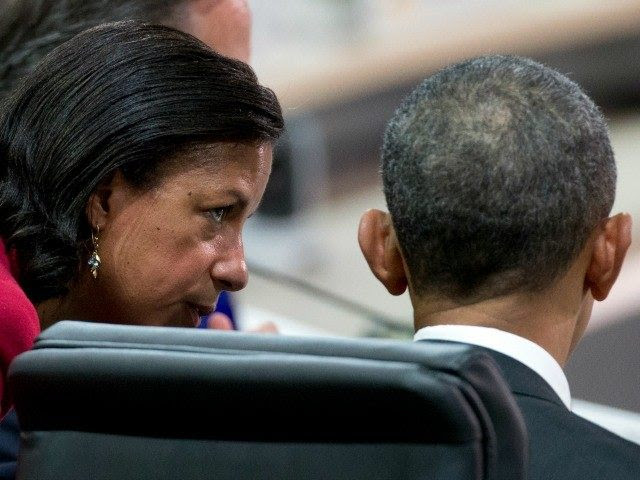 The National Security Council cannot hand over records relating to former National Security Adviser Susan Rice’s surveillance of Americans, because they have been moved to the Obama presidential library and may be sealed for as many as five years, conservative watchdog Judicial Watch announced Monday.

The NSC informed Judicial Watch in a letter dated May 23 that materials related to Rice’s requests to know the identities of Americans swept up in surveillance of foreign targets, including any Trump campaign or transition officials, have been moved to the library.
The NSC’s Director of Access Management John Powers said in the letter:

Judicial Watch earlier this year filed a Freedom of Information Act (FOIA) request for those documents, including of communications between Rice and any intelligence community member or agency regarding any Russian involvement in the 2016 elections, the hacking of Democratic National Committee computers, or any suspected communications between Russia and Trump officials.
Judicial Watch President Tom Fitton said the group will seek to find out when the records were moved, and warned of legal actions. He said:

Prosecutors, Congress, and the public will want to know when the National Security Council shipped off the records about potential intelligence abuses by the Susan Rice and others in the Obama White House to the memory hole of the Obama Presidential Library. We are considering our legal options but we hope that the Special Counsel and Congress also consider their options and get these records.

In April, blogger Mike Cernovich, Bloomberg, and Fox News revealed that Rice had requested to “unmask” — or unveil the hidden names of — Trump transition officials who were caught up in surveillance of foreign targets.
Typically, in surveillance of foreign targets’ communications, U.S. citizens mentioned or participating in them would have their names “masked,” or hidden, due to ethical, legal, and privacy concerns. However, government consumers of the intelligence can request to have their names unmasked if it is important to understanding the communications.
According to Cernovich, The White House Counsel’s office identified Rice as the person who had requested the unmasking, after examining her log requests, Cernovich reported on April 2. Bloomberg and Fox News would later corroborate the report. The revelation lent credence to Trump’s assertion that the Obama administration had been surveilling his transition team.
The Wall Street Journal editorial board has argued Rice had no reason to request the unmaskings. Since then, the House intelligence committee has also subpoenaed the intelligence community for information on unmasking requests by Rice, former CIA Director John Brennan, and U.S. Ambassador to the United Nations Samantha Power.
The misuse of unmasking came under media scrutiny after U.S. officials illegally leaked to the Washington Post a private conversation between former Trump National Security Adviser Michael Flynn and Russian Ambassador Sergei Kislyak on December 24. Flynn resigned after those communications, not because anything inappropriate was found, but because he had misrepresented those communications to Vice President Mike Pence.
NSC Unmasking Records Response by Kristina Wong on Scribd

Posted by theodore miraldi at 12:52 PM