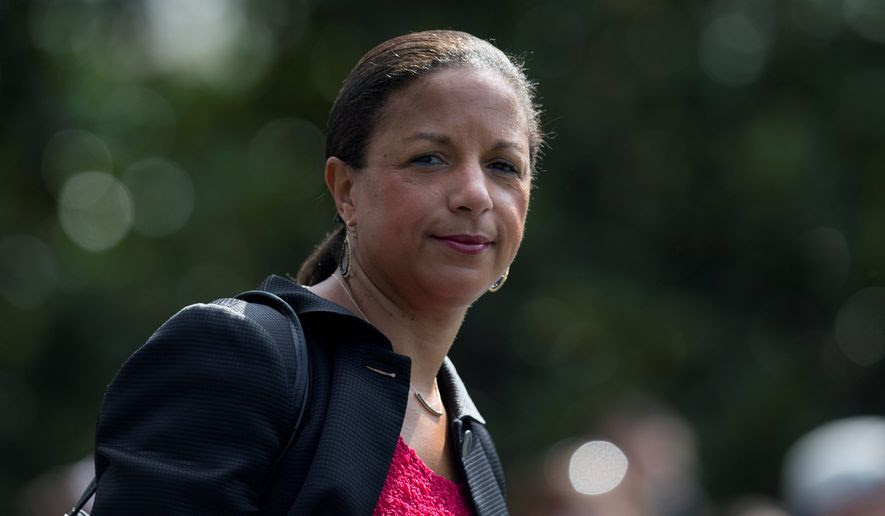 
House intelligence committee sources say career officials at the National Security Council are slow-walking the delivery of subpoenaed records on former National Security Adviser Susan E. Rice’s handling of classified information and the “unmasking” of Trump campaign workers — material from the Russian hacking probe that middle-level NSC managers claim was transferred to President Obama’s library and could “remain closed to the public for five years.”
One source, speaking only on the condition of anonymity, called the transfer curious and appeared to reflect an effort by former administration officials to obscure evidence on whether Ms. Rice and other top officials in the Obama White House illegally tried to identify which Trump campaign and transition aides had been caught up in the U.S. intelligence intercepts of Russian interference in the presidential race.
The two high-level intelligence committee sources told The Washington Times that they are confident the panel’s investigators, despite the delays, will eventually get their hands on the records shipped to a heavily secure archive for Mr. Obama’s yet-to-be-built presidential library.
A spokesman at the National Security Council would not directly address questions on the Rice case, saying only that the council’s staff is “still in the process of reviewing record requests” to ensure that any “executive privilege concerns” are taken into account.
The spokesman, Michael N. Anton, said the intelligence committee subpoenas were not submitted directly to the NSC, but to other agencies within the U.S. intelligence community. He did not respond to a request for specifics on which agencies.
The Barack Obama Presidential Library in Hoffman Estates, Illinois, declined to comment Thursday on the handling of Ms. Rice’s documents.
Rep. Devin Nunes, California Republican and chairman of the House Permanent Select Committee on Intelligence, has been an outspoken proponent of the panel’s focus on the unmasking allegations. He also declined to comment.
Tom Fitton, president of the legal activist group Judicial Watch, said the sealing of unmasking records was an example of how U.S. intelligence agencies are stonewalling.
It was first revealed in a recent Freedom of Information Act exchange between Judicial Watch and the NCS that the records had been moved to the Obama library’s secure archive.
“Having to subpoena this information indicates the insanity of the situation when the nation’s top intelligence agencies are withholding information — basic information — that could bring to an end the controversy raging across this country,” Mr. Fitton said in an interview Thursday.
He said he is considering other legal options to obtain the records.
“We are having to sue to get basic information,” he said. “It is a shell game of documents being shifted over to the library. These documents are the smoking gun that investigators are looking for, and everyone knows it.”
Mr. Fitton said President Trump “could get the [Rice] records himself.”
“They are restricted access,” he said. “But there are ways that he could get them because they are executive branch records and he can get him.”
In March, Ms. Rice admitted to requesting the unmasking of the names of some Americans redacted in raw intelligence reports on the U.S. surveillance intercepts, but argued that the requests were well within her job duties as national security adviser and were in no way driven by political motivations to know which figures from the Trump campaign were being discussed.
Mr. Trump on Twitter has repeatedly complained that the unmasking efforts and the Obama White House’s handling of the Russian hacking probe have not received sufficient attention in the various investigations on Capitol Hill and by Justice Department special counsel Robert Mueller.
On May 31, Republicans and Democrats on the House intelligence committee issued a series of subpoenas related to the Russia investigations. Three of the subpoenas — sent to intelligence community agencies — sought records relating to alleged unmasking requests made by senior Obama administration figures, including Ms. Rice, CIA Director John O. Brennan and U.S. Ambassador to the U.N. Samantha Power.
Democrats want the probes to stay tightly focused on possible obstruction of justice by Mr. Trump and collusion between his associates and the Kremlin. The U.S. intelligence community has unanimously concluded that the Kremlin was behind an organized cyberattack campaign to interfere in the U.S. election and undermine the candidacy of Democrat Hillary Clinton last year.
But since the Russia probes launched earlier this year, Mr. Trump and his aides have argued that the real scandal lies elsewhere. They contend that senior Obama administration officials, including Ms. Rice, inappropriately unmasked and perhaps illegally leaked to the media the names of Trump campaign officials swept up in the hacking probe, and failed to take sufficient steps to stop the hacking once it was uncovered.
Judicial Watch sent a Freedom of Information Act request to the NSC in April seeking records concerning Ms. Rice’s communications on a range of subjects.
NSC Access Management Director John Powers responded on May 23 — roughly a week before the House intelligence committee began seeking the records.
“Documents from the Obama administration have been transferred to the Barack Obama Presidential Library,” Mr. Powers wrote. “You may send your request to the Obama Library. However, you should be aware that under the Presidential Records Act, presidential records remain closed to the public for five years after an administration has left office.”
Source>http://www.washingtontimes.com/news/2017/jun/22/susan-rice-records-intelligence-committee-wants-ar/
Posted by theodore miraldi at 7:44 AM