IT'S ABOUT TIME! Next should be Eric Holder's Cover-up of Fast & Furious. And top that off with the Benghazi Cover-Up by Hillary...tmiraldi 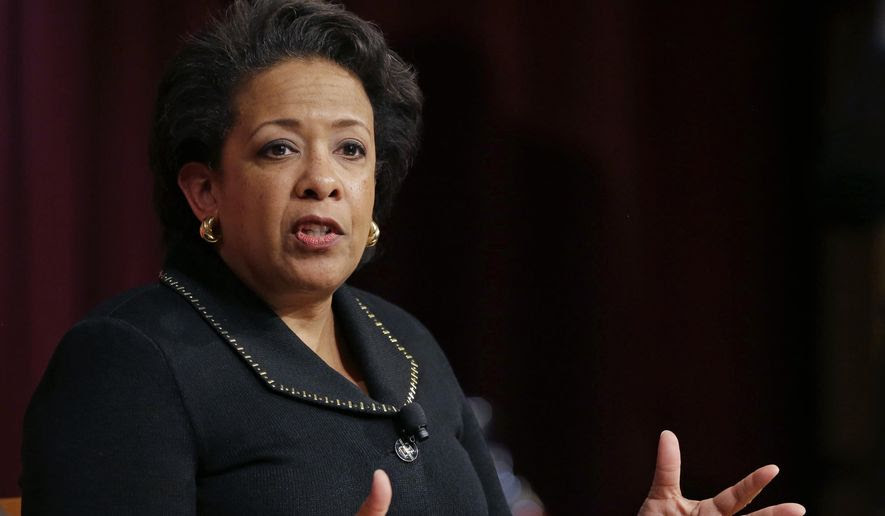 The Senate Judiciary Committee has opened a probe into former Attorney General Loretta Lynch’s efforts to shape the FBI’s investigation into 2016 Democratic presidential nominee Hillary Clinton, the committee’s chairman announced Friday.
In a letter to Ms. Lynch, the committee asks her to detail the depths of her involvement in the FBI’s investigation, including whether she ever assured Clinton confidantes that the probe wouldn’t “push too deeply into the matter.”
Fired FBI Director James B. Comey has said publicly that Ms. Lynch tried to shape the way he talked about the investigation into Mrs. Clinton’s emails, and he also hinted at other behavior “which I cannot talk about yet” that made him worried about Ms. Lynch’s ability to make impartial decisions.
Mr. Comey said that was one reason why he took it upon himself to buck Justice Department tradition and reveal his findings about Mrs. Clinton last year.
The probe into Ms. Lynch comes as the Judiciary Committee is already looking at President Trump’s firing of Mr. Comey.
Sen. Charles E. Grassley, chairman of the committee, said the investigation is bipartisan. The letter to Ms. Lynch is signed by ranking Democratic Sen. Dianne Feinstein and also by Sens. Lindsey Graham and Sheldon Whitehouse, the chairman and ranking member of the key investigative subcommittee.
Letters also went to Clinton campaign staffer Amanda Renteria and Leonard Benardo and Gail Scovell at the Open Society Foundations. Mr. Benardo was reportedly on an email chain from the then-head of the Democratic National Committee suggesting Ms. Lynch had given assurances to Ms. Renteria, the campaign staffer, that the Clinton probe wouldn’t “go too far.”
At a Senate hearing earlier this month, Mr. Comey told lawmakers that Ms. Lynch had attempted to change the way the FBI described its probe of Mrs. Clinton’s use of a private email server. The change appeared to dovetail with how Mrs. Clinton’s supporters were characterizing the probe.
“At one point, [Ms. Lynch] directed me not to call it an ‘investigation’ but instead to call it a ‘matter,’ which confused me and concerned me,” Mr. Comey said during his June 8 testimony before the Senate Select Committee on Intelligence. “That was one of the bricks in the load that led me to conclude I have to step away from the department if we are to close this case credibly.”
Acknowledging that he didn’t know whether it was intentional, Mr. Comey said Ms. Lynch’s request “gave the impression the attorney general was looking to align the way we talked about our investigation with the way a political campaign was describing the same activity.”
Mr. Comey said the language suggested by Ms. Lynch was troublesome because it closely mirrored what the Clinton campaign was using. Despite his discomfort, Mr. Comey said, he agreed to Ms. Lynch’s language.
• Andrea Noble contributed to this story.
Source>http://www.washingtontimes.com/news/2017/jun/23/senate-announced-probe-loretta-lynch-behavior-2016/
Posted by theodore miraldi at 1:47 PM