The LAWYER Finds a PERMANENT Client 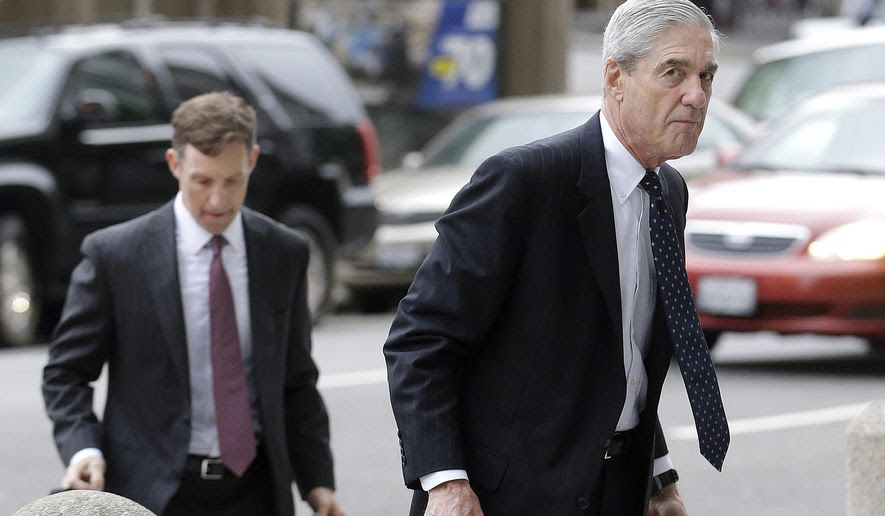 ANALYSIS/OPINION:
Every lawyer has a bit of the ambulance-chaser lurking deep in his heart, and dreams of one day landing a permanent client. Even a lawyer as distinguished, as ethical, as high-minded, as above all reproach and as disdainful of personal glory and profit as a special prosecutor.
A special prosecutor, any special prosecutor, is necessarily a canker sore on the body politic, but sharp enough, as ambitious enough, to get himself appointed special prosecutor, or special counsel. “Counsel,” suggesting distance and probity, sounds more seemly than “prosecutor,” which suggests a hint of grubbiness. We’ve all seen the movie about the tricks a clever prosecutor uses to nail coonskins to the wall on his way to higher office.
The Washington Post’s blockbuster that Robert Mueller III (the most famous Washington name with that many Roman numerals since Robert Griffin III quarterbacked the Redskins) has Donald Trump in the crosshairs of his rifle is hardly news. Of course the president is his target. That was the point of the dance when it was first dreamed by the losers early in the morning of last Nov. 9. Mr. Mueller knows better than anyone that once he marches up the hill, he has to march down with the corpse of a president.
When he does, he will be the toast of the great American swamp. The search continues for the evidence that proves the president sold the White House, the Smithsonian Institution with all its treasures and maybe even the Lincoln Memorial to the Russians. But that’s old stuff now. Nobody really believes there’s a little black dress with a tell-tale stain hidden somewhere in Moscow. The endless search for Russian plunder was all the Democrats had, and they had to keep the narrative running until something authentic turned up.
There’s probably no smoking gun lying about in the search for evidence of presidential obstruction, either, but Mr. Mueller has hired a hundred lawyers, bulking up an investigation with a mile-long tail and he can easily keep the meter running all the way through the Donald’s second term.
The Post’s blockbuster, insofar as any blocks were busted, consists mostly of innuendo, heavy breathing and clever if transparent tricks of the writer’s trade, wearing out the verb “suggests” in discussing what “officials” and “people familiar with the matter” were said to have nudged, shrugged and winked to the writers. All anonymously, naturally.
The authors of The Post account finally conceded that investigating a president for “possible” crimes is “a complicated affair,” even if evidence of a crime is found: “The Justice Department has long held that it would not be appropriate to indict a sitting president.” Not inappropriate so much as impossible.
The way to indict and convict a president of “high crimes and misdemeanors” is plain and clear without the innuendo, heavy breathing and “suggestions” by unnamed participants in “interviews.” Congress, which has several investigations already running or at hand, collects evidence and decides whether to impeach, by a vote of the House of Representatives, and convict, by a vote of two thirds of the U.S. Senate, and no nuclear option.
This president is impatient, as all builders of a Manhattan skyline would be impatient. Comfortable in the rough high-pressure atmosphere of carpenters, bricklayers, bulldozer operators, inspectors, bankers and other moneymen, such builders often don’t fare well in the toils of government service, where sloth, indolence and inertia are the cultivated virtues.
Mr. Trump has an ego of considerable size, as many people have noticed, and he sometimes cuts corners in dealing with minions, as he usually regards all others to be. Either he didn’t know, or didn’t think about appearances when he suggested (to use a favorite word of certain hunters trying to bag a president) to James Comey that it would be nice if he could go easy in his investigation of Mike Flynn. That’s not something even a president ought to do.
But it hardly smells like evidence of an obstruction of an investigation. Mr. Comey, who may have been the most delicate 6-foot-8 cop in town, could have told the president, even the president, where to get off. In a lawyerly way. Instead, he retreated to a safe space to write a love note to himself.
A president should know by now, with all the precedents before him, what happens when he agrees to a special prosecutor. He’ll have a permanent ache in an embarrassing place. He ought at least to put a sell-by date on the investigation. If Mr. Mueller III can’t find the evidence of a high crime or a misdemeanor in three months time, it might not be there. All those lawyers could look for a client somewhere else.
Source>http://www.washingtontimes.com/news/2017/jun/15/robert-mueller-has-trump-in-his-sights/
Posted by theodore miraldi at 9:13 AM