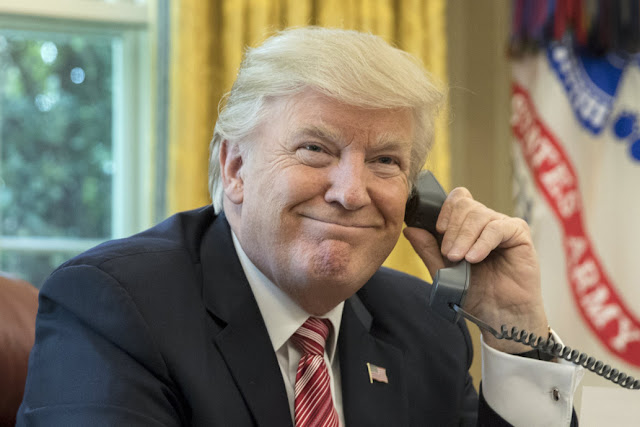 
It was many years ago, but the memory lingers of the first time I was embarrassed to be a journalist. It was a steamy summer afternoon and reporters and photographers were shoe-horned into a small Manhattan apartment for a civic group’s announcement.
As we waited, a photographer wearing a “press” card in his battered fedora picked up a bud vase from a table, pulled out the rose and drank the water in one gulp.
The hostess was horrified and shrieked, “What are you doing?” He looked at her as if she were nuts and said simply, “It’s hot in here and I’m thirsty.”
I laugh now at the outlandishness of the photographer’s behavior, but at the time I cringed and wondered: Do I really want to be a journalist and end up like that?
America should be so lucky now. Bad manners are the least of it.
In the sixth month of Donald Trump’s presidency, we are witnessing an unprecedented meltdown of much of the media. Standards have been tossed overboard in a frenzy to bring down the president.
Trump, like all presidents, deserves coverage that is skeptical and tough, but also fair. That’s not what he’s getting.
What started as bias against him has become a cancer that is consuming the best and brightest. In rough biblical justice, media attempts to destroy the president are boomeranging and leaving their reputations in tatters.
He accuses them of publishing fake news, and they respond with such blind hatred that they end up publishing fake news. That’ll show him.
CNN is suffering an especially bad case of Trump Derangement Syndrome, even trying to make a virtue of its hostility to the president. In doing so, executives conveniently confuse animus with professional skepticism, and cite growing audiences as proof of their good judgment.
The bottom line matters, and there is certainly an audience for hating Trump all the time. But facts and fairness separate major news organizations from any other business looking to make a buck, and a commitment to them creates credibility and public trust.
That’s how CNN sold itself for years — boring but trustworthy. Now it’s boring and untrustworthy.
For all its bravado, the network might be having doubts about its course. Its apology and retraction of a story connecting a Trump associate to a Russia investment fund, and the resignation of three journalists involved suggests the network fears it has lost control of its own agenda. It also issued a special edict barring all Russia coverage without approval from top bosses.

That’s hardly a solution to a problem that starts at the top. The secret recording of a CNN producer by James O’Keefe’s Project Veritas catches the producer saying that CEO Jeff Zucker relentlessly pushes stories on Trump’s ties to Russia even though, the producer says, the subject is “mostly bulls–t.”

Russia, Russia, Russia is a fixation for all the networks, with a new study by the Media Research Center showing 55 percent of Trump coverage on nightly broadcasts was related to the Russia investigation.
That adds up to 353 minutes of airtime since May 17, compared to 47 minutes on Trump’s decision to withdraw from the Paris climate pact, 29 minutes on the fight against terrorism and 17 minutes on the efforts to repeal and replace ObamaCare, according to the Daily Caller’s summary of the study. It said tax reform got a mere 47 seconds of coverage.
Too much coverage is far from the only problem with Russia reporting. Writing for The Intercept, Glenn Greenwald shows how reckless CNN, the Washington Post and others have been, and makes two key points.
First, that mistakes are “always in the direction of exaggerating the threat and/or inventing incriminating links between” Russia and Trump. Second, that all the false stories “involved evidence-free assertions from anonymous sources that these media outlets uncritically treated as fact.”
He’s right, and I would add another dimension: For all the focus on Russia, the media totally missed a key point. To wit, that the Obama administration did nothing about Vladimir Putin’s attempt to interfere in the 2016 election even though the White House knew about it for months.
Of course, most media organizations spent eight years cheerleading everything Obama did, and it’s no secret that members of his administration, along with career Democrats, are the anonymous sources feeding the anti-Trump narrative.
Still, it is remarkable that, if it weren’t for the unproven allegations of Trump collusion, the media would have no interest in the Russia story at all. This despite the fact that leading officials, including both Democrats and Republicans, have called the interference an “act of war.”
But it’s a strange war — one that is important only to the extent Trump can be linked to it. Otherwise, who cares?
A similar selective outrage is happening with daily White House press briefings. Tired of being the mouse in a cat-and-mouse game of torture, Trump’s press secretary, Sean Spicer, has kept the briefings basically intact but ordered live cameras and audio equipment turned off.
Predictably, the press corps has reacted as though Trump has shredded the Constitution, burned the Declaration of Independence and peed in their beer. Reporters are complaining bitterly and some murmur about a boycott, which would be like gouging out their last eye.
The White House Correspondents’ Association weighed in, saying, reasonably, that the briefings are important sources of information. But then it went off the rails, with its president, Jeff Mason of Reuters, saying televising them is “clearly in line with the spirit of the First Amendment” and that “doing away with briefings would reduce accountability, transparency, and the opportunity for Americans to see that, in the US system, no political figure is above being questioned.”
As Mason’s claims grew more grandiose, I flashed back to that photographer drinking from the bud vase so long ago. He was wrong, but honest and devoid of pretentious self-importance.
On the other hand, there is nothing honest about the claim that letting reporters perform for the camera in the White House keeps faith with the First Amendment. It’s just inflated self-interest hiding behind the Constitution.
And really, really embarrassing to those of us who love journalism.
Source>http://nypost.com/2017/06/27/the-media-will-do-anything-to-bash-trump-and-now-theyre-hurting/
Posted by theodore miraldi at 7:55 AM