Trump, the New JFK in SPACE

Like his predecessor, the president sees opportunities in space and economic innovation 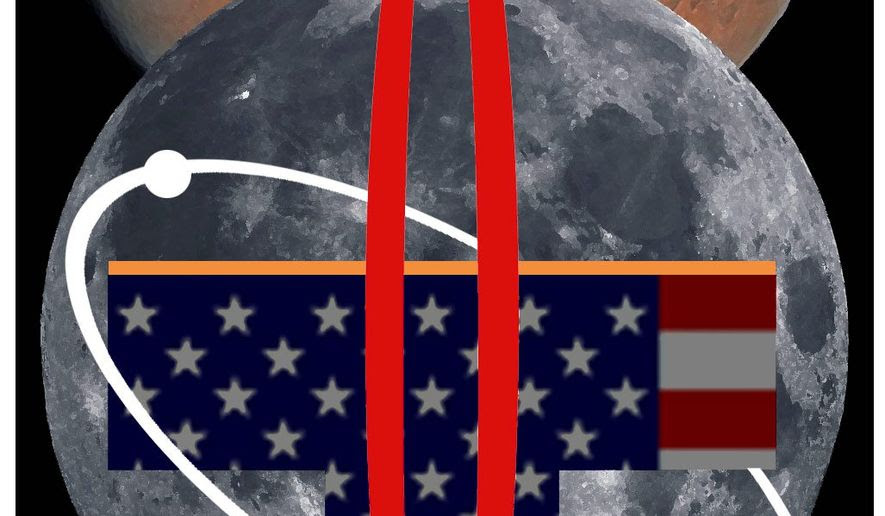 ANALYSIS/OPINION:
Bill Gates first noticed parallels between President John F. Kennedy and President-elect Donald Trump after speaking with the newly electd president: “But in the same way President Kennedy talked about the space mission and got the country behind that, there can be a very upbeat message that [Trump‘s] administration [is] going to organize things, get rid of regulatory barriers, and have American leadership through innovation.”
Indeed, there may be more to Mr. Gates’ JFK-space reference than just a metaphor.
The Cold War with Russia greeted JFK upon becoming president in 1961, including the failed Bay of Pigs invasion of Cuba in his first 100 days. Currently, Donald Trump is experiencing real Cold War-style tensions with China, Russia and their client states.
Over the last decade North Korea has developed a nuclear weapon and ballistic missile capability that threatens its neighbors and (eventually) the U.S. Recalling obvious parallels with the 1960s, Robert Litwak (Woodrow Wilson International Center) and others call this a “Cuban Missile Crisis in slow-motion”.
In 1957 the “shock of the century” occurred when Russia unexpectedly launched the first artificial satellite (Sputnik) into orbit. The American public’s firm belief in its national security and technological superiority was severely shaken. In 1962 Russia secretly placed nuclear missiles in Cuba that were aimed at the U.S. Miraculously World War III was avoided, but significantly, the Cuban Missile Crisis intensified bilateral competition in the 1960s space race. In an effort to lower tensions JFK proposed a joint U.S.-Russia mission to the Moon in his September 1963 speech to the United Nations.
It’s challenging to identify potential 21st-century “Sputnik moments.” For example, in December 2013 China became the first nation in the 21st century to land a rover on the Moon. While it attracted some Cold War-style concern in the space community, there was no Sputnik-level arousal in the American public.
When China launched a spacecraft that flew around the Moon and then successfully soft-landed back in China on Nov. 1, 2014, the event was lost in the intense media coverage of the 2014 U.S. elections. In fact, including its growing space station, China was signaling its capability to send spacecraft and soon humans to the Moon — at least, a mini-Sputnik moment, considering China’s successful anti-satellite program.
For North Korea, the Sputnik moment and Cuban Missile Crisis analog may soon converge. But Mr. Trump’s new relationship with China will hopefully encourage them to reduce nuclear tensions. By analogy with our 1960s Russia/Cuba experience, this could easily stimulate momentum toward the Moon — either in competition with China or possibly ISS-style cooperation.
In any case, the water ice (billions of gallons) at the lunar poles is a strategic resource that can accelerate scientific, technological and commercial development of the Moon as well as Earth-Moon space. And as of now, it remains unclaimed.
Both JFK and Mr. Trump inherited slow economies. President Eisenhower’s average annual growth over his term was 2.5 percent plus a “very sluggish” recovery from the 1958 recession, and President Obama’s average was 2.0 percent per year, including the slowest recovery since World War II. JFK’s bold solution was a dramatic tax-cut plan for both individuals and businesses: “In short, it is a paradoxical truth that tax rates are too high today and tax revenues are too low, and the soundest way to raise revenues in the long run is to cut rates now.”
JFK’s tax reform package worked; according to Larry Kudlow, “The U.S. economy grew by roughly 5 percent yearly for nearly eight years.” And Mr. Trump is following in JFK’s economic footsteps.
Mr. Trump’s charisma, vision, and style are reminiscent of JFK and he may be able to lead this generation to Mars and beyond. Indeed game-changing, 1960s-style decades (“Maslow Windows”) featuring major economic and technology booms, great human explorations, and geopolitical stress appear about twice per century back to Lewis and Clark.
They are often triggered by a Sputnik moment and a large economic boom, and powered by the societal ebullience it creates. Although definite signs of unusual optimism are visible in the markets, corporate profits, and numerous surveys, we may not know until later this year when they will expand into a transformative JFK-style boom.
• Bruce Cordell was formerly with General Dynamics. He teaches “Human Spaceflight” at the University of Southern California.
Source>http://www.washingtontimes.com/news/2017/jun/18/donald-trump-sees-new-opportunities-for-space-expl/
Posted by theodore miraldi at 7:25 AM