'WHY ME?': Rice Links RACE & GENDER to ‘UNMASKING’ Backlash 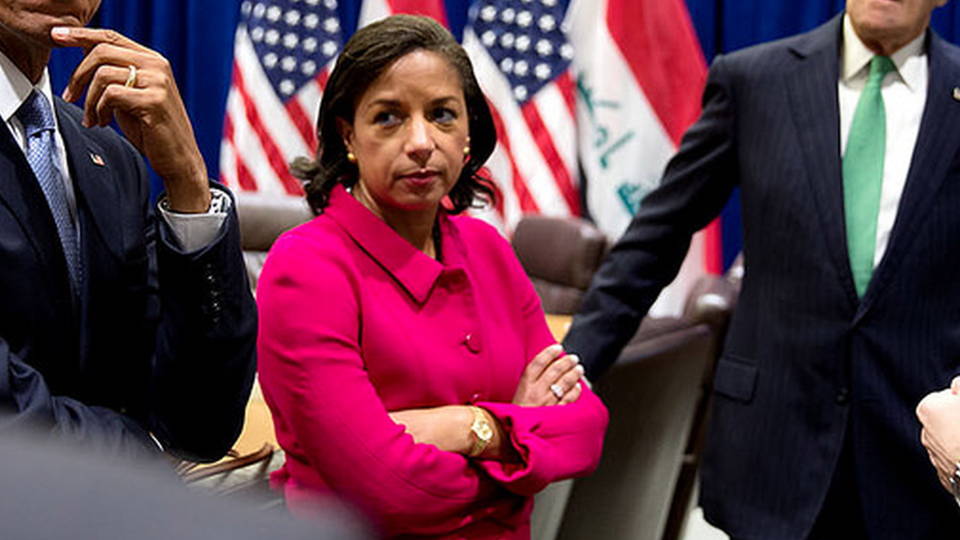 Christopher Wallace
Susan Rice, the Obama national security adviser under fire over her alleged involvement in the “unmasking” of Trump associates during the 2016 presidential election, suggested in a fresh interview that race and gender might be playing a role in the scrutiny she’s faced.
In an interview with journalist Michael Tomasky for New York Magazine, Rice reportedly questioned the criticism she’s faced dating back to the Benghazi controversy.
“Why me? Why not Jay Carney, for example, who was then our press secretary, who stood up more?” she asked.
Tomasky noted in the piece that Carney “isn’t an African-American woman, of course” and apparently asked Rice whether that is the key factor. Rice, in response, left the door open:
“I don’t know… I do not leap to the simple explanation that it’s only about race and gender. I’m trying to keep my theories to myself until I’m ready to come out with them. It’s not because I don’t have any.”
SUSAN RICE REQUESTED TO UNMASK NAMES
But Rice mentioned other prominent female figures – like Hillary Clinton and Condoleezza Rice – who faced “ad hominem” attacks, suggesting a correlation.
Asked about the comments, a Republican Capitol Hill source pushed back. “This is screaming out for attention… She’s saying I don’t know why they all started picking on me to begin with.”
As to the suggestion of race and gender being a factor, the source countered, then “why would there be a subpoena for a white male?”
That was a reference to the fact that Rice is not the only focus of the congressional probe into unmasking. Investigators have issued subpoenas to three different agencies: NSA, CIA and FBI.
Those subpoenas have asked for unmasking information related to three individuals: former CIA Director John Brennan, former U.S. Ambassador to the United Nations Samantha Power, and Rice.
She’s not the only focus of congressional frustration, either. Sen. Lindsey Graham, R-S.C., had a tense exchange with a top intelligence community lawyer at a Senate Judiciary Committee hearing on Tuesday where he complained he still doesn’t have an answer on whether his communications have been monitored.
“Am I ever gonna get [the response] in my lifetime?” he asked.
Rice told Judy Woodruff on PBS on March 22 that she “knew nothing” about the unmasking of Trump associates. But weeks later on MSNBC, she admitted she sometimes sought out the identities of Trump associates who communicated with foreigners, a request known as “unmasking” in the intelligence community.
But “I leaked nothing to nobody,” Rice told MSNBC.
Rice initially became a target of Republican criticism back in 2012 for giving misleading information about the origin of the Benghazi terror attack. On Sept. 16, 2012, just days after the attack, Rice appeared on all five Sunday political talk shows to claim the Benghazi attack spun out of a protest over an anti-Muslim video produced in California.
Former CIA Director David Petraeus reportedly told lawmakers later that the intelligence community considered the attack an act of terrorism at the time. Four Americans were killed in Benghazi, including U.S. Ambassador to Libya Chris Stevens.
Source>http://www.foxnews.com/politics/2017/06/28/susan-rice-suggests-race-gender-bias-linked-to-unmasking-backlash.html
Posted by theodore miraldi at 4:18 PM