WHY We Want To KILL EACH OTHER Over Politics

What drives people to invest ordinary politics with such vitriol that they fantasize about murdering people on the other side? 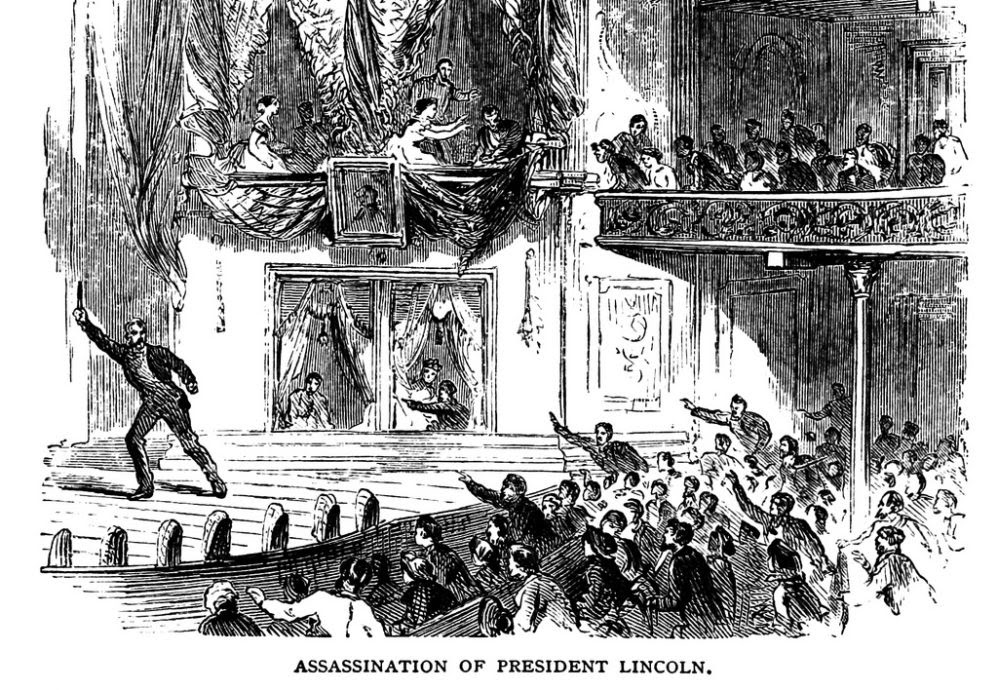 
Political violence has seemingly come back into fashion this year, in part because of the so-called “resistance” against President Trump—itself a metaphor for violent guerilla warfare, in the absence of a tyranny that requires resistance.
But it’s not actual violence that is in vogue so much as fantasizing about violence. Just in the past few weeks, we’ve had Kathy Griffin doing a photo shoot with her chopping off the head of a Donald Trump mannequin and New Yorkers flocking to see Trump as Julius Caesar getting stabbed to death in a Shakespeare play. (Yes, the play is deep and explores complex issues, but who are we kidding? Stabbing Trump to death in front of a bunch of Upper West Side liberals is an obvious form of fanservice.)
Just in the past week, we’ve heard Johnny Depp fantasizing about being the second actor to assassinate a president. Great company he’s got there. Then my favorite: a drawing circulating around on the Internet in response to the Republicans’ Obamacare “replacement” bill—depicting Republican Senate Majority Leader Mitch McConnell as a blood-spattered killer gleefully holding up a knife. 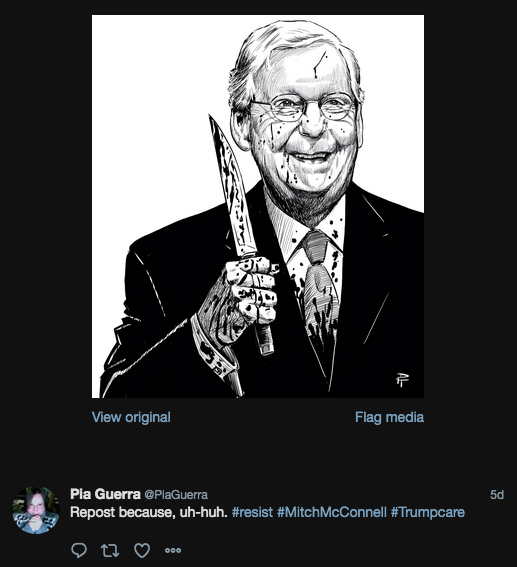 It’s not that different from the targets they sell at the shooting range that are meant to represent the scary intruder you’re practicing to gun down.
During the middle of all of this, in totally unrelated news, an angry man who spent way too much time on anti-Republican Facebook groups, showed up at a practice for a congressional charity baseball game and shot at a bunch of Republican politicians, seriously wounding Rep. Steve Scalise, as well as a congressional aide, a lobbyist, and a Capitol policewoman.
I’m not saying that any of the celebrities playing around with assassination fantasies are directly responsible for the actions of the congressional baseball shooter. Shooting off your mouth is not the same thing as shooting off a gun. There will always be angry people who locate the source of their troubles in some unsuspecting public figure, whose violent death is the supposed solution for the wreck they’ve made out of their lives. This wouldn’t stop if we all suddenly just decided to talk nicely to each other about politics. People would find some other reason to shoot someone, like shooting the president to impress an actress.
But that’s not really the point. The point is: why do normal people want to behave this way? Why can’t they restrain themselves from playing around with the tropes and trappings of the political killer? What drives them to invest ordinary politics with such vitriol that they fantasize about murdering people on the other side?
That drawing of McConnell as a bloodthirsty killer who must be stopped is the giveaway. Why is he portrayed that way? Because he wants to alter the rules by which the government subsidizes health insurance. He’s not even trying to repeal Obamacare; the current bill is a messy compromise that mostly just tinkers with Obamacare. The only way this makes McConnell into a cold-blooded killer is if you project way too much importance and efficacy onto the activities of government—if you think that government policies, particularly those that involve more government spending and regulation, are the very wellspring of life, which your political opposition is arbitrarily cutting off.
If government power is the people’s best and only hope, then to deny the use of that power, or even to exercise it in the wrong way, is just like killing people. So you are naturally going to long to see the political malefactors behind such a policy struck down, for the same reasons we love the scene in the action movie when the bad guy finally falls off the skyscraper and gets what’s coming to him.
This attitude is not strictly limited to the provinces of the Left where we currently see it so flamboyantly displayed. As we have recently discovered, some on the Right also look to government for salvation, hoping that the right kind of limits on trade and immigration, the right deals made by the right dealmaker, will solve all of our problems—and anyone who doesn’t support that leader is a traitor.
But the basic idea of government as salvation is associated more with the Left, because expanding the power of government is their primary political cause. Not only that, in idealizing the power of government, they also idealize the methods or instruments of government: force, coercion, violence.
What has been running through my mind over the past few weeks is an essay written in 1894 by a long-forgotten defender of liberty named Auberon Herbert: “The Ethics of Dynamite.” Dynamite was a new technology then, the first modern high explosive, and Herbert was specifically referring to a European craze of mad bombers who adopted this new weapon as their tool for lashing out at the rest of society and trying to terrorize people into adopting their half-baked political programs. Basically, it was Ted Kaczynski, The Early Years.
The good citizens of the world were quite scandalized by this trend of dynamite bombers, but what Herbert pointed out was that the dynamiter was simply the most consistent form, the reductio ad aburdum, of the increasingly influential new theory of government. Dynamite, he wrote, “is a purer essence of government, more concentrated and intensified, than has ever yet been employed. It is government in a nutshell.” In other words: do what I say, or die. He hailed it as the ultimate product of the “doctrine of deified force.”
We are living now in this new world of dynamite. No wonder our political rhetoric is so explosive.
All of our politics today is a threat to coerce, or resentment against coercion, or a plan to coerce people in a different and supposedly better way. If the end goal is coercion, no wonder people fantasize about using force or violence as the means. No wonder they grow so livid when the wrong person gets into office and dares to control the apparatus of coercion they created. And it’s no wonder they fantasize about bumping him off.
There’s a reason there is not merely a legal but a cultural taboo against threatening to assassinate the president, no matter who he is, or against killing political leaders. We don’t want a political system that is ruled by force. But if we want to lower the stakes of politics and pull people back from the edge of quasi-murderous rage, we need a much stronger taboo against the threat of coercion against anyone. We need to defuse the “doctrine of deified force.”
Source>http://thefederalist.com/2017/06/29/why-we-want-to-kill-each-other-over-politics/
Posted by theodore miraldi at 7:30 AM