Another RAPE. Another ILLEGAL Immigrant 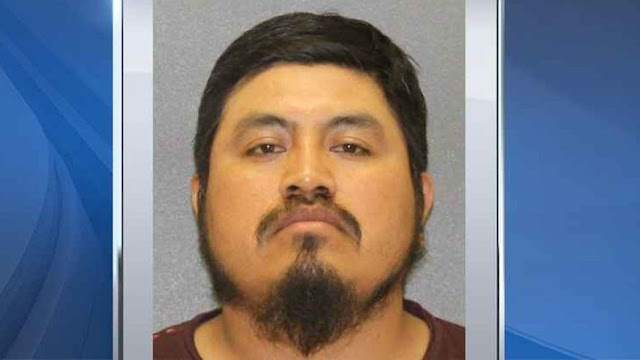 An illegal immigrant living in New York allegedly raped a girl several times when she was 12 and 13 years old -- including once in front of a baby.
Fernando Alvarado-Perez, 37, was charged with first-degree rape, criminal sexual act and four counts of endangering the welfare of a child, the Livingston County News reported.
The Genessee Sun reported Alvarado-Perez had sex with the girl while in front of a baby, however, additional information surrounding the case was not available. It’s unclear when the alleged rapes occurred.
Alvarado-Perez told police he had come to the United States illegally about 10 years ago, officials said, adding that Border Patrol and immigration officials were notified. An immigration detainer was issued by the Department of Homeland Security to the Livingston County Jail where Alvarado-Perez is being held without bail.
The Livingston County News reported a new policy dictating how Geneseo police officers are supposed to interact with individuals who may be illegal immigrants did not come into play when investigating and arresting Alvarado-Perez.
Geneseo Police Chief Eric Osganian told the Livingston County News in an email Monday: “Our officers were concerned about investigating this incident and assisting the family the best we could with referral services to other agencies. His immigration status wasn’t a priority to us.”
The police department adopted the policy in May after a traffic stop in March involving two adult women and six children suspected of being in the country illegally.
Renda Cole, a resident of Geneseo, launched a GoFundMe page to aid Alvarado-Perez’s alleged victim in finding “the help she will need for the rest of [her] life professionally and emotionally in the form of counselling and anything medically.”
“Anyone affected by rape knows how difficult it can be and how physically draining it is on a family,” Cole wrote on the fundraiser page.
Source>http://www.foxnews.com/us/2017/07/25/illegal-immigrant-in-upstate-ny-allegedly-raped-young-girl.html
Posted by theodore miraldi at 6:35 PM