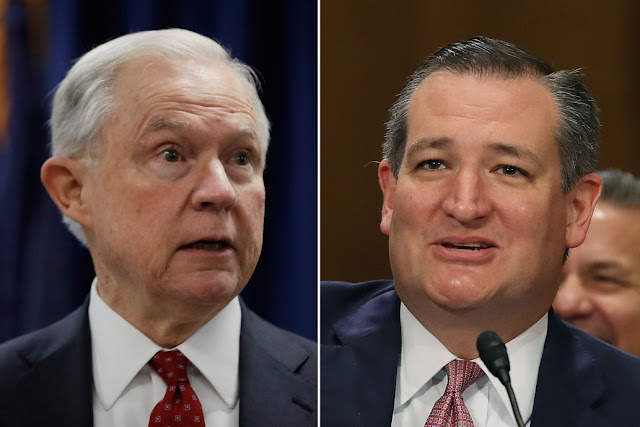 President Trump is considering replacing Attorney General Jess Sessions with Texas senator and loyal Trump supporter Ted Cruz, a report said.
Trump has become increasingly frustrated with the attorney general since he recused himself from the Russian collusion investigation and White House officials are looking at replacements, according to The Washington Post.
Two people being considered for the job are Cruz and former New York City mayor Rudy Giuliani, the paper said.
Giuliani has already publicly dismissed the idea of taking on the role.
Cruz has previously said that he didn’t think it was necessary for Sessions to recuse himself in the probe.
Trump has made a number of public comments disparaging Sessions, including calling the attorney general “beleaguered” in a tweet Monday.

Donald J. Trump
✔@realDonaldTrump
So why aren't the Committees and investigators, and of course our beleaguered A.G., looking into Crooked Hillarys crimes & Russia relations?