More than 70 percent of Rep. Clay's expenditures this cycle have

gone to his sister's law firm 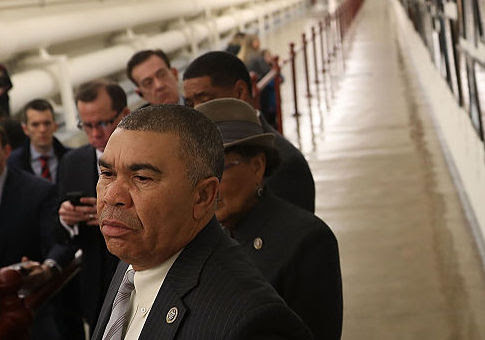 Democratic Rep. William Lacy Clay (Mo.) has paid a law firm owned by his sister more than $80,000 from his campaign funds so far this year, newly released campaign finance records show.
Clay Jr. For Congress released their second quarter figures late Friday, which shed light on the campaign's financials spanning from April 1 to June 30.
The records show that Clay has continued to disburse tens of thousands to the Law Office of Michelle C. Clay LLC, a Silver-Spring, Md.-based firm that is owned by his sister. The firm is located just outside of Washington, D.C.
Michelle Clay's firm was cut four checks totaling $18,100 from Rep. Clay's campaign committee in the beginning of April for services marked as fundraising, compliance, record keeping, and community organizing. The firm was paid another $18,000 at the beginning of May and pulled in an additional $18,000 during June, according to the filings.
During the first quarter, which spans from Jan. 1 to March 31, Clay's campaign paid $27,000 to his sister's firm. Clay's committee reports spending $115,000 since Jan., which means that the firm has accounted for more than 70 percent of his total campaign expenditures this year.
This is not the first time that the Missouri Democrat has paid his sister from his campaign.
Throughout the 2016 election cycle, Rep. Clay made $150,000 in payments to the firm from his campaign. Since 2002, the firm has pulled in more than $800,000.
Rep. Clay has also made a number of payments to a foundation that is owned by his father, former Rep. Bill Clay Sr., who represented the same district that Clay represents.
Bill Clay Sr.'s foundation, the William J. Clay Scholarship and Research Fund, was established in 1993 out of college cost concerns and barriers to financial resources some students may face.
The foundation was given anywhere between $500 and $7,500 from his son's campaign between the 2002 and 2016 election cycles. His father's foundation has pulled in $31,000 from the campaign.
Rep. Clay's office did not return a request for comment by press time.
Source>http://freebeacon.com/politics/dem-rep-paid-sisters-law-firm-80000-from-campaign-funds-this-year/

Posted by theodore miraldi at 8:56 AM