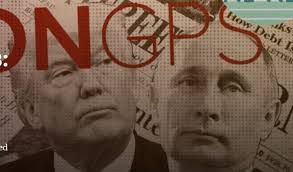 Get used to hearing the name “Fusion GPS” because it’s about to be all over the place.
The opposition research firm has been implicated in both a smear campaign against the Magnitsky Act — which imposed sanctions on Russia after the killing of an anti-corruption lawyer, an act that reportedly angered Putin enough that he retaliated and blocked Americans from adopting Russian babies — and, most recently, has been pegged as the source of the infamous Trump dossier detailing salacious and unfounded dirt on the president intended to discredit him.
Byron York of the Washington Examiner reports that the man behind the Magnitsky Act smear, former Wall Street Journal reporter Glenn Simpson, will be sitting down for a private interview with the Senate Judiciary Committee and that out of nowhere Democrats are suddenly interested in what he might have to say about Fusion GPS’s other work — the Trump dossier.
Democrat committee members, according to York, were surprisingly inquisitive about what businessman William Browder, who had crusaded in support of the Magnitsky Act, had to say during a hearing Thursday regarding Fusion and the dossier.

Again, the good news for Republicans was not that Browder could enlighten the committee on the Trump dossier. He couldn’t. The good news was the Democrats finally showed some interest in learning how the dossier came into being.
That could be particularly important when Simpson, who has in recent weeks refused to testify before the committee and vowed to assert his Fifth Amendment right against self-incrimination, finally sits down with committee investigators in a private, transcribed interview. Simpson has so far stonewalled all questions about who commissioned and financed the dossier. But Thursday’s developments give Republicans some hope they will someday learn the answer.

Columnist Kim Strassel has a few suggestions at The Wall Street Journal as to why:

What if, all this time, Washington and the media have had the Russia collusion story backward? What if it wasn’t the Trump campaign playing footsie with the Vladimir Putin regime, but Democrats? The more we learn about Fusion, the more this seems a possibility.

Simpson is known, according to Strassel, to be tight with Democrats. And at the same time he was working with Fusion to help the Russians smear the Magnitsky Act, Fusion was also working with a the author of the Trump dossier — former British intelligence officer Christopher Steele — to dig up incriminating information on Trump.
It’s little wonder Democrat Senators are interested in finding out exactly what others who have come in contact with Fusion’s tactics, like Browder, might know. They want to make sure if their party’s implicated in something as dirty as the Trump dossier, they’re on record as needing answers about it to prove they, themselves, knew nothing about it beforehand.
Source>http://www.redstate.com/slee/2017/07/28/fusion-gps-possibly-working-democrats-discredit-trump/?utm_source=rsmorningbriefing&utm_medium=email&utm_campaign=nl
Posted by theodore miraldi at 9:22 AM