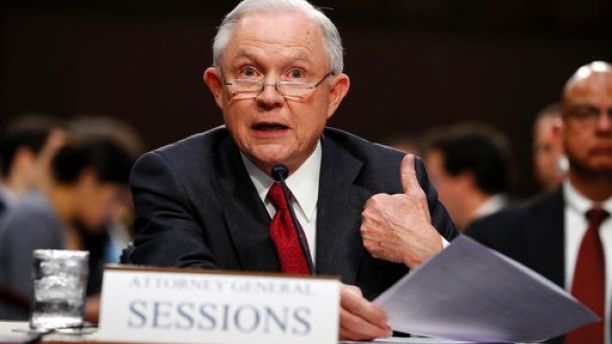 
Could Attorney General Jeff Sessions end up at the Department of Homeland Security?
It’s an idea some political observers have been debating after President Trump announced Friday that John Kelly, who leads the department, would replace Reince Priebus as White House chief of staff.
Here’s how the theory goes: The president has been lashing out at Sessions for recusing himself from the Russia meddling investigation. Sessions would be able to continue his work against illegal immigration as secretary of the Department of Homeland Security. And then the president would appoint someone else to the Department of Justice who would then fire Robert Mueller as special counsel in the Russia probe.
Dana Perino, the former White House press secretary under George W. Bush, argued such an arrangement could placate conservatives who would be outraged if Sessions was ousted from the administration.
“Conservatives that came to Jeff Sessions’ defense this week all said, ‘But he’s doing the best on the issue we care about most and that is immigration.’ Well, where can Jeff Sessions do even more on immigration? As the secretary of Homeland Security,” Perino said Friday on Fox News’ “The Five.”
She added, “And then how can the conservatives complain? And then you have a new AG, [the president] thinks, who can fire Mueller.”

Expand / Collapse
Attorney General Jeff Sessions speaks on Capitol Hill in Washington, Tuesday, June 13, 2017, as he testifies before the Senate Intelligence Committee hearing about his role in the firing of James Comey, his Russian contacts during the campaign and his decision to recuse from an investigation into possible ties between Moscow and associates of President Donald Trump. (AP Photo/Alex Brandon)
But one Republican senator is already opposing the idea.
“DHS Secretary Jeff Sessions doesn't sound right, doesn't feel right,” South Carolina Sen. Lindsey Graham tweeted Saturday. “Bad idea.”
Graham also said, “AG Jeff Sessions has a good ring to it. Highly qualified, committed to the rule of law, tough on crime, and fiercely independent.”
KELLY, NEW WHITE HOUSE CHIEF OF STAFF, HAILED AS 'STAR OF THE ADMINISTRATION'
Such a move would not be popular with liberals either.
“To be clear: appointing Jeff Sessions to replace John Kelly at DHS to disrupt the Russia investigation would be met with MASS RESISTANCE,” Zac Petkanas, a Democratic strategist who previously worked for Hillary Clinton and Harry Reid, tweeted Saturday.
Politico cited two sources saying the idea of Sessions being moved to DHS has been talked about among department staffers. But the outlet also said a Trump administration source called the possibility unlikely.
A spokesman for DHS said Friday that Kelly remains secretary of the department until Monday when Elaine Duke, the deputy secretary, will become acting secretary. The president will then nominate a new leader for the department.
A White House spokesman referred questions about Sessions to the Department of Justice.
Source>http://www.foxnews.com/politics/2017/07/29/could-jeff-sessions-be-moved-to-department-homeland-security.html
Posted by theodore miraldi at 4:23 PM