Most VOCAL Republican CRITICS of Trump Are the LEAST Popular 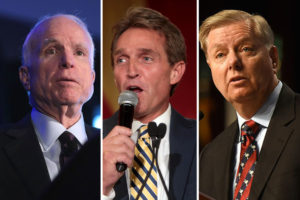 A new list of approval polls for all 50 U.S. senators released this week seems to indicate the Republican senators with the lowest popularity among voters at home are those who have been the most vocally critical of President Donald Trump — and who have historically supported amnesty for illegal immigrants.

The least popular GOP senators, according to the series of polls from Morning Consult, were — in this order — Sen. Mitch McConnell (R-Ky.), Sen. John McCain (R-Ariz.), Sen. Jeff Flake (R-Ariz.), and Sen. Lyndsey Graham (R-S.C.). McConnell, McCain, and Flake were the three least popular senators overall, regardless of party affiliation.

According to Morning Consult, the popularity rankings "are based on more than 140,000 interviews with registered voters nationwide conducted from April 1 through June 18."

"McConnell, Flake, McCain, and Graham. Hearing those names together takes me — and probably a lot of others — back to 2013," said Eddie Zipperer, an assistant professor for political science at Georgia Military College.

"Flake, McCain, and Graham were three of the four Republicans who were part of the Gang of Eight," Zipperer noted. "They put together an immigration bill along with four Democrats that was nothing short of a total Republican surrender of the issue," Zipperer told LifeZette, "it was an amnesty bill."

Zipperer noted McConnell, despite not being among the Gang of Eight, was nevertheless a cheerleader for the group.

"Mitch McConnell wasn't part of the Gang of Eight, but as the minority leader at the time, he praised the senators and the one-sided compromise they had made," he said.

According to Zipperer, the capitulation mentality of some Republicans was likely an aftereffect of the GOP defeat in the 2012 presidential election.

"Romney had just lost the 2012 presidential election to President Obama, and there was this total meltdown among establishment Republicans who believed that no Republican would ever be president again unless they totally capitulated to Democrats on the issue of illegal immigration," said Zipperer. "Obviously, the 2016 election of President trump proved the opposite to be true."

McCain and Graham's position on the rankings may also be a result of their determined and consistent support for foreign adventurism, he noted.

"McCain and Graham have the added bonus of being neocon foreign policy hawks and are basically among the handful of people left in this country who still think the invasion of Iraq was a good idea," said Zipperer.

Not only did the NeverTrumpers support failed ideas, their refusal to support the Republican candidate was seen as tacit support for Clinton. For too many voters the issues at stake were far too important to allow a Clinton victory.

"Flake, refused to vote for President Trump in the 2016 election, and was even featured in a Hillary Clinton campaign ad," Zipperer said, "Flake's moral stand against President Trump's election was extremely unpopular."

He said GOP opposition to Trump was based on a way of thinking that never connected with ordinary Americans.

"NeverTrump-ism was a swamp philosophy that didn't trickle down to American voters, as evidenced by the fact that Trump did just as well among Republicans as Hillary Clinton did among Democrats," said Zipperer.

"Flake and the rest of the NeverTrumpers nearly cost Republicans the Supreme Court. If they had there way, the Senate wouldn't be fighting over how to repeal Obamacare. Instead, they'd be trying to resist (and probably not very hard) President Clinton's amnesty bill," Zipperer said.

Americans' rejection of the Never-Trumpers and the business-as-usual brand of Republican politics they represent is a particular problem for Flake, who faces reelection in the upcoming midterms.

"Flake ran as conservative, governed as a moderate, tried to push amnesty on Americans, and campaigned against the Republican presidential nominee," said Zipperer. "That's not exactly a recipe for re-election."

Posted by theodore miraldi at 7:25 AM