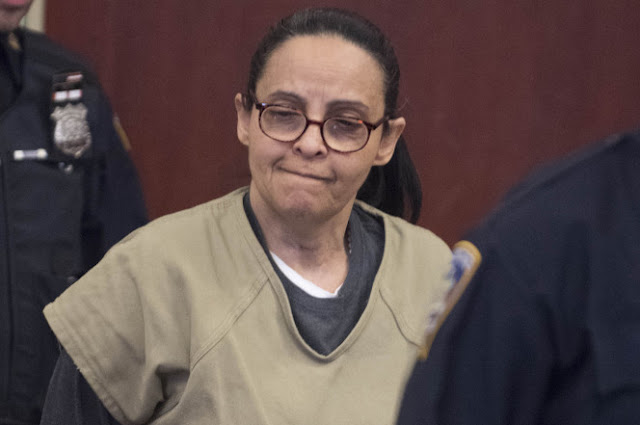 
The nanny accused of killing two children in her charge confessed to the savage slayings — and even apologized, a cop testified on Thursday.
Yoselyn Ortega, 55, had been in the hospital for about a week after stabbing Lucia Krim, 6, and Leo Krim, 2, in 2012, when she allegedly confessed.
“She started saying, ‘Oh, my God, I’m sorry for what I’ve done!’ and, ‘Put me out of my misery!’ multiple times,” said NYPD Officer Delilah Solis, who was assigned to guard Ortega at NewYork-Presbyterian/Weill Cornell Medical Center.
The nanny had slashed her own throat in a botched suicide attempt after allegedly slaughtering the two children in their family’s Upper West Side apartment on Oct 25, 2012. She was recuperating from surgery.
In another disturbing admission, on Nov. 4, 2012, Ortega appeared to blame the children’s parents.
“You don’t know what they put me through,” muttered Ortega, Solis testified at a hearing in Manhattan Supreme Court to determine the admissibility of the statements at trial.

Lucia and Leo Krim
The day before, Ortega allegedly griped to Police Officer Luis Sandoval, who was on prisoner watch, “You don’t know what the lady did to me.”
Justice Gregory Carro granted the hearing at the request of defense lawyer Valerie Van Leer-Greenberg, who has challenged the unorthodox methods used to obtain many of the statements.
Van Leer-Greenberg has argued that her client was repeatedly interrogated while heavily sedated and after she had retained a lawyer.
Source>http://nypost.com/2017/07/20/cop-nanny-confessed-apologized-for-fatally-stabbing-kids/
Posted by theodore miraldi at 7:30 AM