New HOLES in Loretta Lynch’s Story on the HILLARY Probe 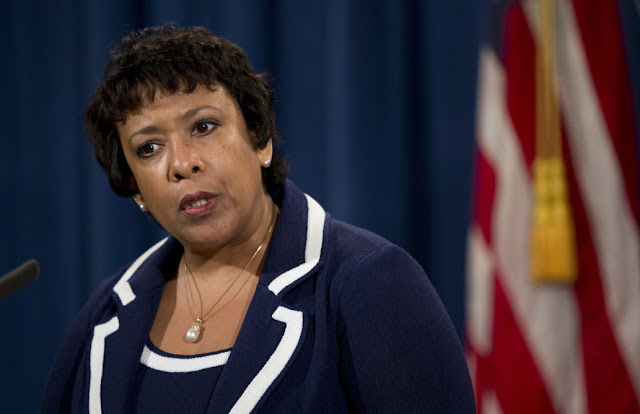 When former Attorney General Loretta Lynch testified last year about her decision not to prosecute Hillary Clinton for mishandling classified information, she swore she never talked to “anyone” on the Clinton campaign. That categorical denial, though made in response to a series of questions about whether she spoke with Clintonworld about remaining attorney general if Hillary won the election, could come back to haunt her.
The Senate Judiciary Committee, which has launched a bipartisan investigation into Lynch for possible obstruction of justice, recently learned of the existence of a document indicating Lynch assured the political director of Clinton’s campaign she wouldn’t let FBI agents “go too far” in probing the former secretary of state.
Lynch’s lawyer says she is cooperating with committee investigators, who are seeking answers to several questions, as well as relevant documents. Among other things, they want to know if she or any of her Justice Department staff “ever communicated with Amanda Renteria,” who headed Clinton’s political operations during the campaign. Renteria, who has been identified in the document as the senior Clinton campaign aide with whom Lynch privately communicated, has also been asked to testify.
The committee also wants to know if Lynch or any of her aides were in contact with former DNC chief Debbie Wasserman Schultz regarding the Clinton e-mail investigation, according to a three-page list of questions that Senate Judiciary Chairman Chuck Grassley and ranking Democrat Dianne Feinstein recently sent to Lynch at her New York apartment.

Next up: a special counsel to probe Team Obama's obstruction of justice

Senate investigators have combed through a transcript of Lynch’s testimony before the House Judiciary Committee in July 2016. In retrospect, several of her statements strain credulity. But one in particular stands out, and could present legal problems for Lynch.
During the House Judiciary hearing, Rep. David Trott (R-Mich.) slammed Lynch for failing to recuse herself from the Clinton investigation despite meeting privately with the target’s husband, former President Bill Clinton, a week before the then-attorney general let Hillary skate. Then, referring to rumors of her possibly staying on in a hypothetical Hillary administration, he asked if Lynch had met with anyone on Hillary’s staff during the yearlong investigation, to which she replied: “I have not spoken to anyone on either the campaign or transition or any staff members affiliated with them.”
The committee, however, now knows from a document obtained by the FBI reportedly showing a Democratic operative’s claim that Lynch had privately assured Renteria that the Justice Department “would not push too deeply” into the investigation of Clinton’s private e-mail server, which contained top secret information from the State Department.
And it will press her to explain the discrepancy — along with why she reportedly asked former FBI Director James Comey to leave her office when he confronted her with the document.
There are three explanations: Either Lynch lied under oath, or she never in fact talked to Renteria, or her categorical denial was meant to later claim she was merely discussing her role post-election.
The committee will also drill down on her explanation of her highly suspicious meeting with Bill Clinton during the investigation.
Lynch claimed the former president boarded her plane, which was parked on the tarmac at the Phoenix airport, simply because “he wanted to say hello.”
But the meeting lasted at least 30 minutes and had to be cleared by the Secret Service as well as FBI security details. It was also the first meeting of any kind on Lynch’s plane.

And if the purpose was a greeting, why wouldn’t a phone call do?
Lynch also got squirrelly when asked about reports that her FBI security detail had banned cameras, even phones, from her meeting with Clinton.
Since her lawyer is on record saying Lynch will “fully cooperate” in the Senate investigation, she’ll have a hard time pleading the fifth in hearings. But that doesn’t mean she won’t try to stonewall.
Dozens of times during the House hearing, Lynch claimed, “I do not recall,” when pressed for sensitive information about her role in the Hillary investigation. And the committee determined that she either “refused to answer or give appropriate response” no fewer than 74 times during the four-hour hearing.
Hopefully Grassley, who now has the backing of Feinstein, who said Lynch’s actions made her feel “queasy,” will have better luck drawing the truth out of Lynch.
Source>http://nypost.com/2017/07/06/new-holes-in-loretta-lynchs-story-on-the-hillary-probe/
Posted by theodore miraldi at 7:48 AM