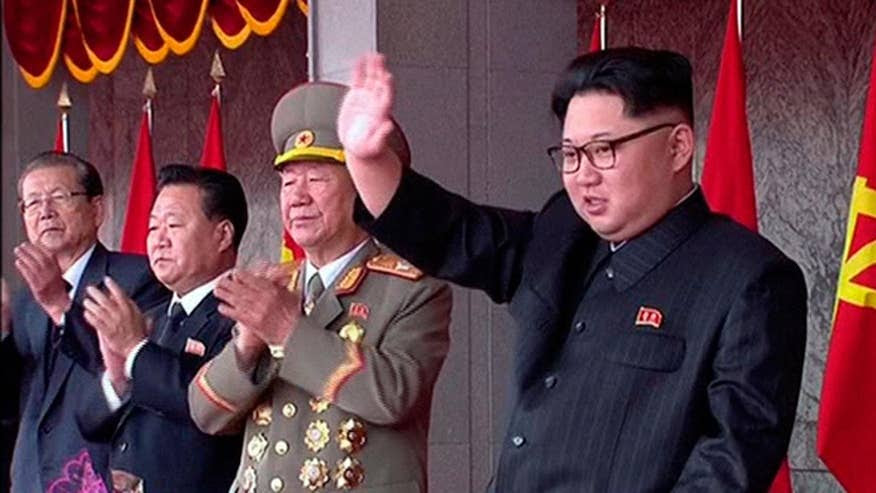 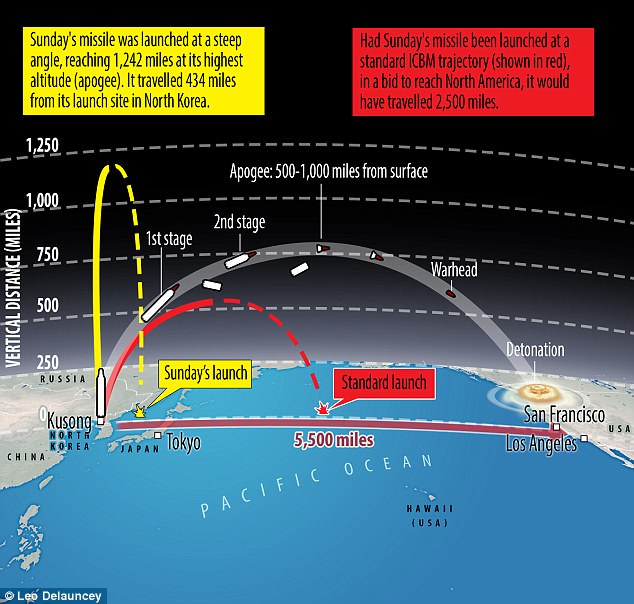 Expand / Collapse
This image made from video of a news bulletin aired by North Korea's KRT on Tuesday, July 4, 2017, shows what was said to be the preparation of the launch of a Hwasong-14 intercontinental ballistic missile, ICBM, in North Korea's northwest.  (KRT via AP Video)
"The threat is much more immediate now," National Security Adviser H.R. McMaster told reporters prior to the launch. "So it's clear we can't repeat the same failed approach of the past."
He added: "So the president has directed us not to do that, and to prepare a range of options -- including a military option, which nobody wants to take, right?"
Vice Adm. James Syring, the director of the Missile Defense Agency, previously said, if it didn't already exist, it would only be a matter of time until North Korea was able to attack the U.S.

Expand / Collapse
This image made from video of a news bulletin aired by North Korea's KRT on Tuesday, July 4, 2017, shows what was said to be the preparation of the launch of a Hwasong-14 intercontinental ballistic missile, ICBM, in North Korea's northwest.  (KRT via AP Video)
"We have to assume that the capability exists today to attack the United States," Syring said.
If the U.S. decides the threat posed by North Korea is too great, the nation has options.

Expand / Collapse
This image made from video of a news bulletin aired by North Korea's KRT on Tuesday, July 4, 2017, shows what was said to be the preparation of the launch of a Hwasong-14 intercontinental ballistic missile, ICBM, in North Korea's northwest.  (KRT via AP Video)
For the first time since the 1990s, the Pentagon ordered two U.S. aircraft carrier strike groups to be positioned off the Korean Peninsula last month. Former Defense Secretary Leon Panetta also said the U.S. could use other means to undercut and diminish Pyongyang.
"We do have covert capabilities, and I think it would be wise for the United States to use those covert capabilities as a way to continue to undermine the North Korean government," Panetta said. "If they do anything stupid, it could end their regime, period."
Russia and China, in a joint statement released by each country's foreign ministry on Tuesday, tried to de-escalate the situation by proposing that North Korea declare a moratorium on nuclear and missile tests and the United States and South Korea refrain from large-scale military exercises.

Expand / Collapse
This image made from video of a news bulletin aired by North Korea's KRT on Tuesday, July 4, 2017, shows what was said to be the launch of a Hwasong-14 intercontinental ballistic missile, ICBM, in North Korea's northwest.  (KRT via AP Video)
The statement was issued following talks between Chinese President Xi Jinping and Russian President Vladimir Putin, who is set to have a bilateral meeting with President Trump on Friday at the G-20 summit in Germany. The North Korea crisis is now likely to be one of the topics the two leaders will discuss.
North Korea claimed its launch marked the “final step” in creating a “powerful nuclear state that can strike anywhere on Earth.” State media said it was ordered and supervised by dictator Kim Jong Un, according to Reuters.
President Trump immediately responded to the launch in a flurry of tweets.

Donald J. Trump
✔@realDonaldTrump
North Korea has just launched another missile. Does this guy have anything better to do with his life? Hard to believe that South Korea.....

Donald J. Trump
✔@realDonaldTrump
....and Japan will put up with this much longer. Perhaps China will put a heavy move on North Korea and end this nonsense once and for all!

Twitter Ads info and privacy
"North Korea has just launched another missile,” Trump wrote. “Does this guy have anything better to do with his life? Hard to believe that South Korea and Japan will put up with this much longer. Perhaps China will put a heavy move on North Korea and end this nonsense once and for all!”
The launch sends a political warning to Washington and its chief Asian allies, Seoul and Tokyo, while also allowing North Korean scientists a chance to perfect their still-incomplete nuclear missile program. It came on the eve of the July 4 holiday, days after the first face-to-face meeting of the leaders of South Korea and the United States, and ahead of the G-20 summit set to take place in Germany.
TRUMP TWEETS ANGRY RESPONSE TO LAUNCH

Twitter Ads info and privacy
The missile test could invite a new round of international sanctions, but North Korea is already one of the most sanctioned countries on Earth. U.N. Security Council resolutions ban it from engaging in any ballistic activities. Since late 2012, North Korea has placed two satellites into orbit with long-range rockets, each time triggering new U.N. sanctions and worldwide condemnation.
TRUMP: ERA OF 'STRATEGIC PATIENCE' WITH NORTH KOREA 'IS OVER'
Last year, North Korea conducted its fourth and fifth atomic bomb tests and claimed a series of technical breakthroughs in its efforts to develop long-range nuclear missiles. The fifth nuclear test in September was the North's most powerful atomic detonation to date.
In their meeting last week, South Korean President Moon Jae-in and Trump vowed to oppose North Korea's development of atomic weapons.
Fox News’ Lucas Tomlinson and The Associated Press contributed to this report.
Source>http://www.foxnews.com/world/2017/07/04/north-korea-claims-to-have-test-launched-its-first-icbm.html
Posted by theodore miraldi at 3:16 PM