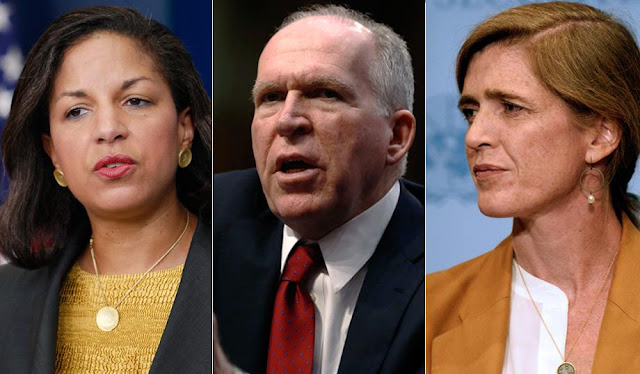 The chairman of the House Intelligence Committee is accusing top political aides of President Obama of making hundreds of requests during the 2016 presidential race to unmask the names of Americans in intelligence reports, including Trump transition officials.
Intelligence Chairman Devin Nunes (R-Calif.), in a letter to Director of National Intelligence Dan Coats, said the requests were made without specific justifications on why the information was needed.

CLICK HERE TO READ THE LETTER
“We have found evidence that current and former government officials had easy access to U.S. person information and that it is possible that they used this information to achieve partisan political purposes, including the selective, anonymous leaking of such information,” Nunes wrote in the letter to Coats.

The letter was provided to The Hill from a source in the intelligence community.
In March, Nunes disclosed that he had seen data suggesting Trump campaign and transition officials were having their names unmasked by departing officials in the Obama White House.
National Security Adviser Susan Rice and CIA Director John Brennan have acknowledged making such requests though they insisted the requests were for legitimate work reasons.
Nunes recused himself from his committee’s work on its investigation over Russia’s meddling in the 2016 campaign after a controversy over his charges about Obama-era unmasking.
The chairman had reviewed intelligence reports on White House grounds that he said showed unmasking of Trump officials by Obama aides. Democrats accused him of working with the White House to make the disclosures.
In Thursday’s letter, Nunes said the total requests for Americans’ names by Obama political aides numbered in the hundreds during Obama’s last year in office and often lacked a specific intelligence community justification. He called the lack of proper justifications a “serious deficiency.”
His letter noted requests from senior government officials, unlike career intelligence analysts, “made remarkably few individualized justifications for access” to the U.S. names.
“The committee has learned that one official, whose position had no apparent intelligence related function, made hundreds of unmasking requests during the final year of the Obama administration,” Nunes wrote. “Of those requests, only one offered a justification that was not boilerplate.”
Sources familiar with the Nunes letter identified the official as then-U.N. Ambassador Samantha Power.
Power did not immediately respond to a request for comment.
Nunes also wrote that “Obama-era officials sought the identities of Trump transition officials within intelligence reports.”
Nunes said he intends to introduce legislation to address concerns about the unmasking process impacting Americans' privacy.
Ordinarily, Americans whose email or phone data or conversations are intercepted by the National Security Agency without a warrant overseas are legally required to have their names redacted or masked with descriptions like “U.S. person 1” to protect their identities in intelligence reports.
But beginning in 2011, Obama loosened the rules to make it easier for intelligence officials and his own political aides to request that the names be unmasked so they could better understand raw intelligence being gathered overseas.
The change has been criticized by liberal groups like the ACLU and conservatives like Nunes because of the privacy implications.
Source>http://thehill.com/policy/national-security/344226-intelligence-chairman-accuses-obama-aides-of-hundreds-of-unmasking
Posted by theodore miraldi at 6:52 PM