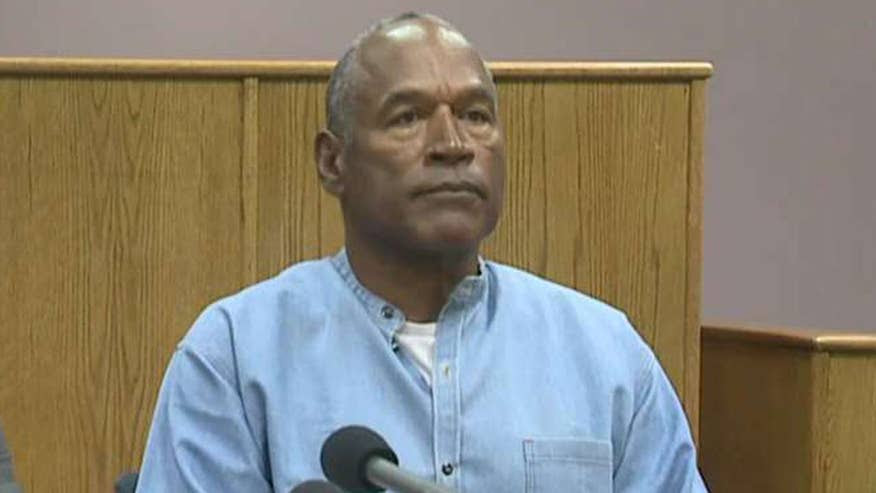 O.J. Simpson, the disgraced former football great, was granted parole Thursday amid his 33-year prison sentence for an armed robbery that has kept him behind bars in Nevada since 2008.
“I’ve done my time, I’ve done it as well and respectfully as anyone can,” the 70-year-old told parole board members via videoconference Thursday at the Lovelock Correctional Facility, around 90 miles northeast of Reno.
Simpson appeared in the hearing room as inmate No. 1027820, dressed in a blue prison uniform. He will be released on Oct. 1 after serving a minimum nine years of the sentence.
“Right now, I'm at a point in my life where I want to spend as much time with my kids and my friends,” Simpson said Thursday.
He said he told the prison wardens upon arrival that he wouldn’t pose a problem and has “kept his word.”
Simpson – who famously was found not guilty in the killings of his ex-wife, Nicole Brown Simpson, and her friend Ronald Goldman, in 1995 – went to prison in 2008 over an armed robbery a year earlier involving two sports memorabilia dealers in a Las Vegas hotel room.
Simpson was convicted of enlisting some men he barely knew, including two who had guns, to retrieve from two sports collectibles sellers some items that he said were really his belongings.
"It's kind of mind boggling to me that they [California] returned property to me that I'm in jail for," Simpson told the four parole board members Thursday, saying the property included letters from celebrities, family photos, certificates of accomplishment and more.

Expand / Collapse
Former NFL football star O.J. Simpson appears with his attorney, Malcolm LaVergne, left, via video for his parole hearing at the Lovelock Correctional Center in Lovelock, Nev.  (AP/Lovelock Correctional Facility)
Simpson claimed he neither pointed a gun at anyone nor made any threats during the crime that put him in prison. He also said the men who went with him to the hotel room received a get-out-of-jail-free card when they told authorities that Simpson told them to do it.
Simpson added that he apologized to the surviving memorabilia dealer, Bruce Fromong, who was a friend, and that he accepted the apology.
Fromong testified in O.J.’s favor Thursday, telling the parole board that “on that day, Simpson was misguided,” but “I don’t feel like he is a threat to anyone out there.”
Turning to Simpson, Fromong said that if Simpson was released: "Juice, I'll be here tomorrow for you."
O.J. SIMPSON MURDER TRIAL: WHERE ARE THE KEY PLAYERS NOW?
Halfway through the hearing, Simpson’s oldest daughter Arnelle gave an emotional testimony in support of her father, saying that “no one really knows what we've been through over these last nine years.
"We just want him to come home. I know in my heart he's been very humbled throughout this situation,” she said. Arnelle, 48, is OJ's daughter from his first marriage to Marguerite Whitley. 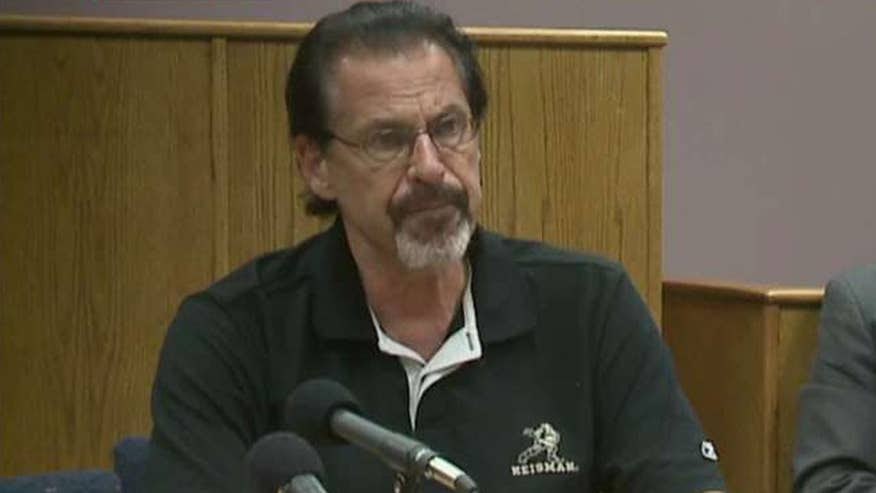 O.J. Simpson told the board Thursday that an alternative-to-violence course he took has been the most important lesson behind bars.
Simpson previously asked for leniency in 2013 in front of the same parole board, saying he had tried to be a model prisoner. He won parole on some convictions but was left with four more years to serve.
The robbery was a new low for Simpson, whose celebrity spanned sports, movies, television and advertising before his fall from grace during his highly publicized murder trial in 1995.
TAKE THE O.J. SIMPSON QUIZ TO TEST YOUR KNOWLEDGE OF SAGA
In 1997, he was found liable in civil court for the deaths and ordered to pay $33.5 million to survivors, including his children and the Goldman family.
The Goldmans believe Simpson got away with murder in Los Angeles, and many people felt the stiff sentence handed down in Las Vegas wasn't just about the robbery.
A Goldman family spokesman told The Associated Press that Ron Goldman's father and sister, Fred and Kim, wouldn’t be part of Simpson's parole hearing but felt apprehensive about "how this will change their lives again should Simpson be released."
By most accounts, Simpson has a clean prison record and is just like any other inmate, sharing a bunk with a cellmate, working in the gym and coaching prison sports leagues, according to Los Angeles Times report.
Simpson was inducted into the Pro Football Hall of Fame in 1985 after an 11-year NFL career as running back with the Buffalo Bills and San Francisco 49ers. A five-time Pro Bowl selection, Simpson also won the Heisman trophy in 1968 when he played college football at USC.
The Associated Press contributed to this report.
Source>http://www.foxnews.com/us/2017/07/20/oj-simpson-parole-hearing-former-football-star-approved-for-october-release.html
Posted by theodore miraldi at 3:08 PM