US, allies prepared to use 'overwhelming force' in North Korea, general says 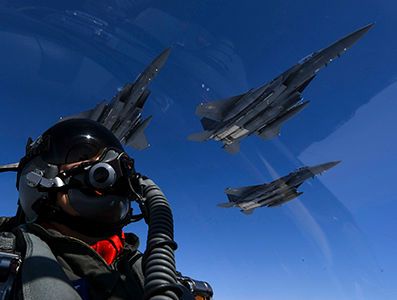 The U.S. and its allies are prepared to use “rapid, lethal and overwhelming force,” if necessary, against North Korea, the commander of the U.S. Pacific Air Forces warned Saturday night.
The statement from Gen. Terrence J. O’Shaughnessy, U.S. Pacific Air Forces commander, came after the militaries of the U.S., South Korea and Japan spent 10 hours conducting bomber-jet drills over the Korean Peninsula.
The training mission was a response to North Korea’s recent ballistic missile launches and nuclear program, and part of the U.S. regular commitment to defending its allies in the Asia-Pacific region, the general’s statement said.
“North Korea remains the most urgent threat to regional stability,” O’Shaughnessy said.
“Diplomacy remains the lead,” he said. “However, we have a responsibility to our allies and our nation to showcase our unwavering commitment while planning for the worst-case scenario.
“If called upon,” he added, “we are ready to respond with rapid, lethal and overwhelming force at a time and place of our choosing.”
North Korea conducted test launches of ICBMs on July 3 and July 28, and has claimed that its weapons can now reach the U.S. mainland.
The country’s recent actions have drawn condemnation from President Trump, and prompted U.S. Secretary of State Rex Tillerson to confer with counterparts from South Korea and Japan to develop a response, Fox News has reported.
Both Trump and Tillerson have criticized China, saying the Beijing government has failed to use its influence to discourage North Korea from developing its nuclear program, Fox News reported.
On Saturday, two U.S. Air Force B-1B bombers, under the command of U.S. Pacific Air Forces, joined counterparts from the South Korean and Japanese air forces in sequenced bilateral missions.
According to the Pentagon, the U.S. bombers took off from Andersen Air Force Base in Guam, then flew to Japanese airspace, where they were joined by two Koku Jieitai (Japan Air Self Defense Force) F-2 fighter jets.

Expand / Collapse
Then-Lt. Gen. Terrence O’Shaughnessy speaks in Paju, South Korea, July 27, 2015.  (Associated Press)
The B-1s then flew over the Korean Peninsula, where they were joined by four F-15 fighter jets from the South Korean air force.
The B-1s then performed a low-pass over Osan Air Base, South Korea, before leaving South Korean airspace and returning to Guam.
Throughout the approximately 10-hour mission, the air crews practiced intercept and formation functions, enabling them to improve their combined capabilities and strengthening the long-standing military-to-military relationships in the region, the Pentagon said.
U.S. Pacific Command maintains flexible bomber and fighter capabilities in the Indo-Asia-Pacific theater, retaining the ability to quickly respond to any regional threat in order to defend the U.S. and its allies, the statement said.
Source>http://www.foxnews.com/world/2017/07/30/us-allies-ready-to-use-overwhelming-force-in-north-korea-general-says.html
Posted by theodore miraldi at 8:03 AM