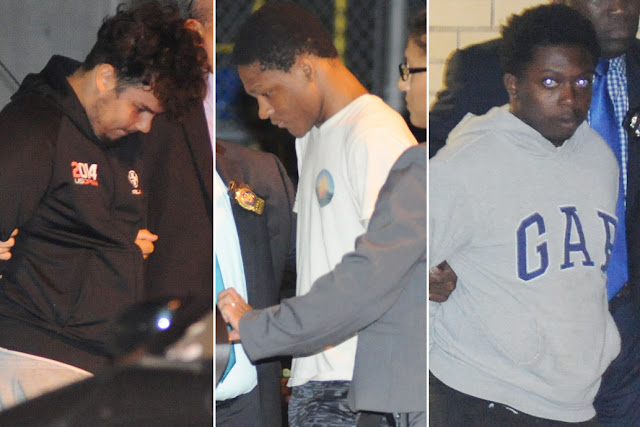 Julisses Ginel, Justin Williams and Brandon Walker are transported from the 112th precinct in Queens.Christopher Sadowski

Prosecutors on Friday described how a group of thugs with a “pack-like mentality” set upon a defenseless churchgoer in Queens — with one of them serving as a “lookout” so his buddies could sexually assault her.
“The crimes that the defendants are accused of committing that night are despicable and are deserving of significant punishment,” District Attorney Richard Brown said in a statement. “Two of them are alleged to have subjected her to heinous acts of sexual abuse.”

Brandon Walker, 20, Justin Williams, 17, and Julisses Ginel, 19, all of South Road in Jamaica, were arraigned Friday as cops continued to search for a fourth suspect who allegedly took part in the attack.
“It is alleged that with a pack-like mentality the defendants and an unapprehended fourth man set upon a defenseless woman coming from church,” Brown said. “In addition, two of the defendants allegedly held up three innocent men at gunpoint the following evening and robbed them of their personal property.”
Speaking in court during the men’s arraignment, Assistant District Attorney Eric Rosenbaum described in horrifying detail how they brutalized the 50-year-old Brooklyn resident.
“Brandon and Williams took turns engaging in oral sex from her,” Rosenbaum said, recalling the statement that Williams allegedly gave to police.
“[The fourth suspect] then put a condom on and then did it again,” he added.
Rosenbaum went on to read a portion of Ginel’s statement, as well — saying he had been the one who threatened to shoot the victim, should she refuse to comply.
“It was suppose to be just a robbery thing,” Ginel told investigators. “I was only there. I saw her naked, and she gave them oral sex. I went to get condoms to help my boys. When I came back, the third one was finishing up.”
After being taken into custody, Ginel allegedly admitted to being a part of the attack — serving as a “lookout” so no one interrupted. Williams has also confessed to being there.
The group allegedly used a pair of fake guns during the robbery, which they stashed in a sewer. They then ran back to a nearby SCO Family of Services shelter, where they had been staying, and attempted to lay low — but they were eventually busted after someone there tipped off police.

“Yesterday, one of the employees at a transitional independent living program for young adults discovered that residents served through the program might be linked to the attack reported in the media,” an SCO spokesperson said in a statement. “Our staff took action and alerted the authorities, which directly led to the arrests.”
All three men have been charged with first-degree criminal sexual act, robbery, and first-degree sexual abuse.
Their bail was set Friday at $500,000 bond/$250,000 cash bail on the sex charges and $50,000 bond/$25,000 cash bail for the robbery. Their next court date is July 28.
Additional reporting by Leonica Valentine
Source>http://nypost.com/2017/07/14/thugs-assaulted-churchgoer-with-pack-like-mentality-prosecutors/
Posted by theodore miraldi at 8:23 AM