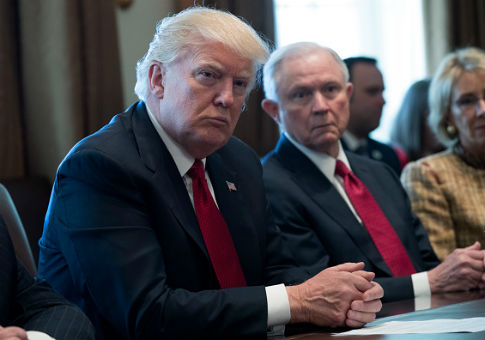 
President Donald Trump wondered why "beleaguered" Jeff Sessions was not looking into Hillary Clinton's "crimes" on Monday in yet another public rebuke of his attorney general.
"So why aren't the Committees and investigators, and of course our beleaguered A.G., looking into Crooked Hillarys crimes & Russia relations?" Trump tweeted.
Trump often referred to Clinton as "Crooked Hillary" during their race for the White House in 2016.

Donald J. Trump  ✔@realDonaldTrump
So why aren't the Committees and investigators, and of course our beleaguered A.G., looking into Crooked Hillarys crimes & Russia relations?

Twitter Ads info and privacy
Trump also tweeted calls on Sunday for Clinton to be probed over her ties to Russia and her private email server use.

Donald J. Trump  ✔@realDonaldTrump
So many people are asking why isn't the A.G. or Special Council looking at the many Hillary Clinton or Comey crimes. 33,000 e-mails deleted?

Twitter Ads info and privacy
Trump ripped into Sessions over his recusal from the Russia investigation in an interview Wednesdaywith the New York Times, saying that decision was "very unfair to the president." Trump added that he would never have nominated Sessions to lead the Department of Justice if he knew Sessions would do that.
Sessions responded to the criticism a day later, saying he loved his job and would continue to serve as long as it was "appropriate." The White House stated Thursday that it had "confidence" in Sessions.


Trump's latest tweet came the same morning as his son-in-law and top adviser Jared Kushner released a statement denying any collusion with Russian officials during the campaign. Kushner is meeting Monday with Senate Intelligence Committee staff.
Source>http://freebeacon.com/politics/trump-isnt-beleagured-jeff-sessions-investigating-hillary-clinton/
Posted by theodore miraldi at 11:32 AM