WAR on the Horizon? China Preps for Korean Conflict 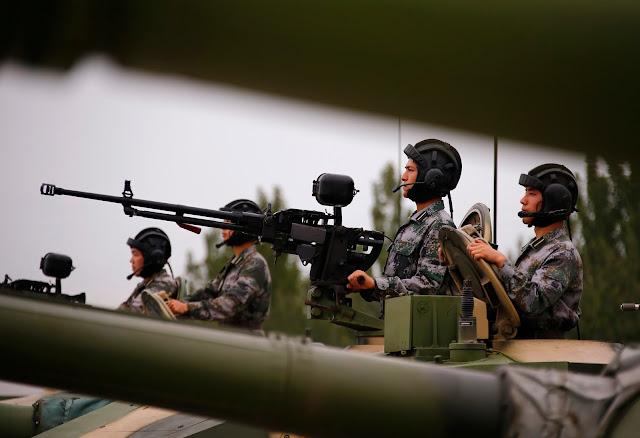 The Chinese military has reportedly been building up defenses along its border with North Korea that coincide with warnings by President Trump that he is considering military action over Pyongyang’s nuclear weapons push.
The Wall Street Journal, citing a review of official military and government websites and interviews with experts, reported that Beijing has built bunkers to protect against nuclear blasts, established a new border brigade and a 24-hour surveillance of the mountainous frontier.
The preparations are intended to respond to worst-case scenarios, like an economic collapse, nuclear contamination or a conflict, the experts told the paper.
The Chinese government has not spoken out about the report of preparations. An official from its defense ministry said in a statement that the forces “maintain a normal state of combat readiness and training.”
“Military means shouldn’t be an option to solve the Korean Peninsula issue,” a Chinese Foreign Ministry spokesman said.
Mark Cozad, who works at the Rand Corp think tank, told the paper these preparations “go well beyond” creating a buffer zone at the border.
“If you’re going to make me place bets on where I think the U.S. and China would first get into a conflict, it’s not Taiwan, the South China Sea or the East China Sea: I think it’s the Korean Peninsula,” he said.
The Trump administration is searching for more effective ways to ramp up pressure on North Korea over its nuclear weapons program. Pyongyang’s recent successful test of an intercontinental ballistic missile — the first by the North — has created even more urgency as the U.S. seeks to stop North Korea before it can master the complex process of putting a nuclear warhead atop a missile capable of hitting the United States.
President Trump has expressed frustration that his initial strategy — enlisting China’s help and influence to squeeze the North economically and diplomatically — has not yielded major results. Trump’s administration is also considering other economic steps including “secondary sanctions” that could target companies and banks — mostly in China — that do even legitimate business with North Korea, officials said.
The Associated Press contributed to this report
Source>http://www.foxnews.com/world/2017/07/25/china-reportedly-preps-for-crisis-along-border-with-north-korea.html
Posted by theodore miraldi at 7:34 AM