Are these NYC STATUES Next on the Chopping Block?

Erasing Culture and History is exactly what Chairman Mao did during the Cultural Revolution in China. These are the things that MADMEN have done throughout History. It's about facing the Truth and allowing people to think for themselves. So Beware, the left has an agenda to take away the only power we truly have...
FREE WILL! 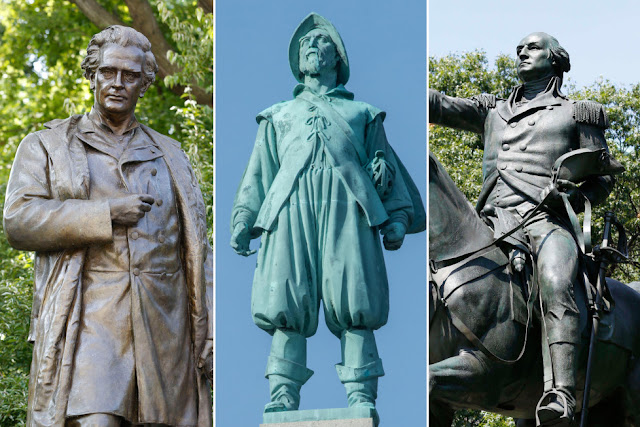 When it comes to art, hate is in the eye of the beholder – and some historians worry that Mayor de Blasio’s plan to root it out of the city’s monuments could spiral out of control.
“I’m distraught,” said Dr. Michele Bogart of Stony Brook University, an expert on public monuments. “We are destroying ourselves.”
The city is searching for “symbols of hate on city property,” de Blasio announced Wednesday, and will eliminate any offending marker or sculpture. It was a reaction to violent protests against the removal of a Robert E. Lee statue in Charlottesville, Va.
But history is not so simple, Bogart told The Post.
“We tend to ascribe meaning to older works according to our views about moral rights and wrongs today,” she said. “It’s legitimate to argue that a work is problematic. But there are disagreements about how indignant you are supposed to get because of that.”
In the past year, activists have lashed out against local tributes to Thomas Jefferson, Theodore Roosevelt, and even a little-known 19th-century gynecologist.
“This drumbeat of iconoclastic sentiment is just feeding on itself, leading to this frenzy that we might really regret,” Bogart warned.
“The more we learn about who these people were the society in which they lived, and what motivated their ideas, the more we learn about how complex our nation is.”
As activists name and shame historical figures who don’t measure up to current standards, The Post toured some of the city statues that could end up on the mayor’s chopping block.

US President ★  American Museum of Natural History, Central Park West; erected in 1940
This statue of the great environmentalist Roosevelt, sitting astride a horse and flanked by African and Native American figures, was meant to symbolize a progressive president uniting America’s races. Some activists today see it as an image of white supremacy, with Roosevelt towering over his companions.

Abolitionist and orator ★  Columbus Park, Brooklyn, Johnson St. near Cadman Plaza; erected in 1891
A fervent opponent of slavery, Beecher inspired thousands to fight for the Union in the Civil War. But his monument depicts an African-American woman kneeling at his feet to lay palm fronds before him – which some regard as a message of white supremacy.

Founding father, statesman, inventor ★  Printing House Square, Nassau and Spruce Sts.; erected in 1872
The signer of the Declaration of Independence, ambassador to France, scientist, and inventor of bifocal glasses and the lightning rod was the most famous man of the American Colonies. He was also a slave owner for most of his life and brokered slave sales through his printing business.

Italian explorer of the Americas ★  Central Park, south end of the Mall, erected in 1892; Columbus Circle, erected in 1892
Long revered as the heroic sailor who discovered America in 1492, some activists today revile Columbus as an imperialist colonizer who slaughtered and enslaved indigenous Caribbeans. City parks host five major monuments to him.

First U.S. President ★  Union Square Park, erected in 1856
The “Father of Our Country” is honored by at least five public statues in NYC, as well as the triumphal Washington Square Arch; but this one is the city’s longest-standing outdoor sculpture. However, the general owned slaves from the age of 11, and more than 300 slaves labored at his Mount Vernon plantation at the time of his death.

Pioneering 19th-century gynecologist ★  Central Park, Fifth Ave. at 103rd St., erected in 1894
Sims invented techniques to treat debilitating childbirth injuries that saved millions of women and are still in use today. But he tested his methods on female slaves in the 1840s, when anesthesia use was rare. Some activists vilify him as “America’s Mengele.”

Union general ★  Sheridan Square, Christopher and Grove Sts., erected in 1936
This statue commemorates the Union general’s Civil War heroism, and his cavalry leadership that led directly to the South’s surrender. His later career, though, included vicious campaigns against the Cheyenne, Kiowa and Comanche in the Plains Wars — when Sheridan allegedly opined, “The only good Indian is a dead Indian.”

Congressman ★  Tompkins Square Park, Avenue A at E. 7th St., erected in 1891
Mail carriers nationwide sent contributions to erect this monument to Cox, who fought to improve their pay and benefits. He served 15 terms in Congress, representing districts in both Ohio and New York. He was also an anti-abolitionist who, in 1864, pushed racist “fake news” that nearly derailed Abraham Lincoln’s re-election campaign.

Senator and diplomat ★  Central Park, West Drive at W. 72nd St., erected in 1876
One of the great orators of the 19th century, Webster served as a senator and congressman from Massachusetts and U.S. Secretary of State. Despite his personal opposition to slavery, he advocated the Fugitive Slave Law, which required northerners to return runaway slaves to their owners. The law was among several passed by Congress in 1850 that temporarily staved off the Civil War.

English explorer of New York Harbor ★  Henry Hudson Park, the Bronx, Henry Hudson Parkway and 227th St, erected in 1939
Hudson claimed the area that is now New York for the Dutch in 1609, setting the city’s history in motion. Today, some activists condemn him as an imperialist interloper who looted Native American villages, kidnapping and killing local people.

Early English colonists ★  Central Park, East and Terrace Drives; erected in 1885
This statue depicts an anonymous Pilgrim, one of those who established the Plymouth colony in 1620. The Pilgrim story of hardship and faith – and, of course, Thanksgiving – is central to American culture. Yet they and the New England settlers who followed them massacred thousands of Native Americans in the decades after their arrival.

Father of the Dominican Republic ★ Duarte Square, 6th Ave. and Canal St.; erected in 1978
Duarte advocated independence for the eastern half of the Caribbean island of Hispaniola, which was under Haitian rule in the early 19th century. In 2007, activists in New York publicized claims that Duarte’s goal of Dominican separatism had racist roots.
Source>http://nypost.com/2017/08/19/are-these-nyc-statues-next-on-the-chopping-block/
Posted by theodore miraldi at 11:27 PM