White House military ban to be based on deployability 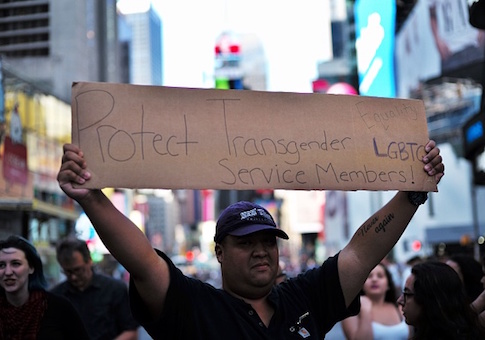 The average transgender soldier will spend 238 days recovering from sex change surgeries and unavailable to deploy, according to an Obama administration study.
The Trump administration's transgender ban places deployability as a determining factor into whether to admit transgender individuals into the military. The White House outlined guidelines to implement the ban within six months in a memo to Defense Secretary Jim Mattis, the Wall Street Journal reported Wednesday.
The ability to be deployed to war zones or bases around the world is an issue for transgender soldiers who undergo taxpayer-funded sex change operations, according to a study by the RAND Corporation.
The 2016 study was commissioned by the Obama administration, which favored opening the ranks to transgender individuals, and funded by the office of former secretary of defense Ash Carter.
The study found that, on average, transgender troops seeking basic sex-change operations would be nondeployable for 238 days, or 34 weeks out of a year. The figure amounts to 65 percent of one year.
"These constraints typically include a postoperative recovery period that would prevent any work and a period of restricted physical activity that would prevent deployment," the RAND study states.
"We note that these estimates do not account for any additional time required to determine medical fitness to deploy," the RAND study added. "Army guidelines, for example, do not permit deployment within six weeks of surgery."
The RAND study reported that male-to-female surgeries would cost 210 days of nondeployability, including medical leave and medical disability periods.
Breast augmentation and mammoplasty, which can include breast implants, would result in troops being unable to work for one week, up to six weeks of restricted physical activity, and up to 60 days of medical disability. The RAND study said breast augmentation would result in 75 days a servicemember could not be deployed.
Genital surgeries require a longer recovery period. RAND reported that a transgender person getting an orchiectomy, the surgical removal of the testicles, or a vaginoplasty, the construction of a vagina, would be nondeployable for 135 days.
Nondeployable time for male-to-female genital surgeries includes four to six weeks of no work; eight-plus weeks restricted physical activity; up to 45 days medical leave; and up to 90 days medical disability.
Sue Fulton, the former president of Sparta, a military organization for LGBTQ individuals, told the Wall Street Journal that transgender individuals are "just as deployable as other service members," and compared the time off to undergoing a gall bladder surgery.
"Other service members may undergo procedures when they are at home base, just as other service members schedule shoulder surgery or gall bladder surgery," she said.
Most people return to normal activities 7 to 10 days after undergoing gall bladder surgery.
The RAND study also notes some individuals undergoing sex-change operations "experience postoperative complications that would render them unfit for duty."
The study states that between 6 to 20 percent of biological males receiving a vaginoplasty, or the construction of a vagina, have complications. Up to 25 percent of biological females receiving phalloplasty surgery, or the construction of a penis, have medical complications, RAND said.
RAND found female-to-male transitions on average take longer recovery times, on average 267 days where they cannot be deployed.
The RAND study reported chest surgery, removal of the breasts, results in 75 days of nondeployability, and a hysterectomy leads to 111 days of nondeployability, including three weeks of medical leave and three months of medical disability.
Genital surgeries for female-to-male, including metoidioplasty, a surgery that enlarges the clitoris to surgically create a penis, and phalloplasty, the construction of a penis, result in 81 days of nondeployable time.
Rep. Vicky Hartzler (R., Mo.), who supports President Donald Trump's action to ban transgender individuals in the military, says the RAND Corporation estimates are low, because they do not take into account other surgeries that transgender advocates say are "medically necessary."
The World Professional Association for Transgender Health deems other medical procedures, including scrotoplasty, surgery to create a scrotum, facial hair removal, facial plastic reconstruction, hair removal, and voice therapy or surgery, as medically necessary for Gender Dysphoria.
Using the RAND study estimates, Hartzler's office found a significant period of total nondeployable time based on the estimates of how many transgender troops would seek sex reassignments.
As the Washington Free Beacon previously reported, transgender surgeries would cost the Pentagon $1.3 billion over 10 years, assuming roughly 8,200 transgender troops undergo taxpayer-funded sex-change operations.
By taking the low estimate from the RAND study of nondeployable time of 210 days, the 8,213 surgical transitions would lead to a total 1,724,730 days of nondeployable time, or 4,725 years.
RAND recommended that the military allow transgender individuals to serve openly and estimated that transgender surgeries would only cost between $2.4 million to $8.4 million per year.
Given that transgender surgeries cost an average of $132,000, according to CNN, the RAND study assumes only 18 to 63 transgender troops would seek taxpayer-funded surgeries.
The RAND cost estimate is significantly lower because it does not account for actual costs of transgender surgeries, but only the cost increase in private health insurance premiums for plans that cover transgender services. The military does not have private health insurance.
The White House directive to Secretary Mattis mainly applies to new recruits and gives the Pentagon the discretion of expelling current transgender service members based on deployability. The memo also instructs the Pentagon to stop paying for transgender medical treatment for those currently serving.
Source>http://freebeacon.com/national-security/average-transgender-soldier-unable-deploy-238-days/
Posted by theodore miraldi at 3:59 PM