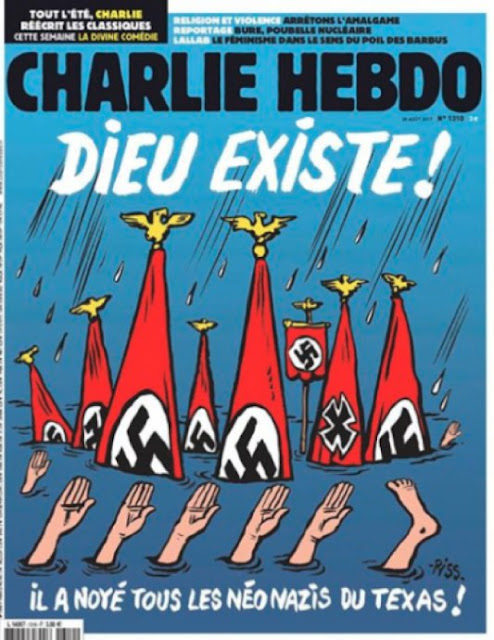 
The new issue of inflammatory French magazine Charlie Hebdo appears to mock the death and utter devastation wrought by Tropical Storm Harvey.
“God Exists! He Drowned All the Neo-Nazis of Texas,” the weekly mag’s cover screams.
An illustration of half-submerged swastika flags and arms giving the Nazi salute accompanies the headline.
Critics were quick to blast the mag for poking fun at the mega-disaster, which claimed at least 37 lives and displaced tens of thousands of people.
“So the idiots at Charlie Hebdo are cheering the #Houston #Harvey disaster b/c they claim it drowned neo-Nazis. WTF?!” tweeted conservative pundit Debbie Schlussel.
“Hey Charlie Hebdo F— You Scumbag! Those were all God Loving Americans that Grandfathers saved FRANCE from NAZI’s,” tweeted user @USMC_Michaels.
The weekly magazine, which trades in controversy, captured international attention when it depicted the Muslim prophet Muhammad — a taboo for adherents.
That issue prompted a deadly terror attack by two French-born gunman who stormed the publication’s office.
Hebdo’s cover is not the first bad take following the historic storm.
A Florida college fired a professor Tuesday for saying Hurricane Harvey was “karma” because Texans supported Donald Trump in the 2016 election.
Source>http://nypost.com/2017/08/30/charlie-hebdo-cover-casts-harvey-victims-as-neo-nazis/
Posted by theodore miraldi at 10:41 PM