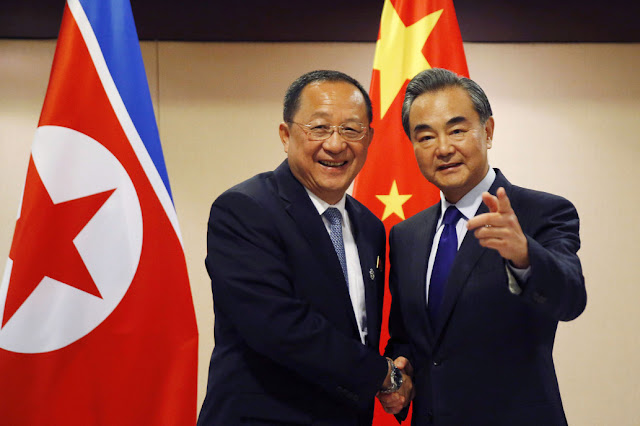 
China ramped up the global pressure against North Korea by warning it not to conduct more missile tests a day after the UN Security Council approved severe economic sanctions against the reclusive regime, according to a report.
“Do not violate the U.N.’s decision or provoke international society’s goodwill by conducting missile launching or nuclear tests,” Chinese Foreign Minister Wang Yi said on Sunday during a gathering of the world’s top diplomats in the Philippines, the Associated Press reported.
President Trump, who has been encouraging China to use its substantial influence on North Korea – a major trading partner – to pressure President Kim Jong Un’s regime to curb its weapons program, praised China and Russia for joining in the UN sanctions vote.
“United Nations Resolution is the single largest economic sanctions package ever on North Korea. Over one billion dollars in cost to N.K.,” Trump tweeted late Saturday.
Secretary of State Rex Tillerson, also attending the Manila summit, praised China’s action.
“It was a good outcome,” he said.
U.S. Ambassador to the United Nations Nikki Haley said the sanctions show “we are not playing anymore.”
“A third of their trade exports have been hit, and we basically gave them a kick in the gut with a billion dollars of sanctions that they are going to begin to feel right away,” Haley said on Fox News’ “Sunday Morning Futures with Maria Bartiromo.”
Still, Washington said it would continue to monitor China’s compliance with the sanctions to prevent backsliding.
“We want to make sure China is continuing to implement fully the sanctions regime,” said Susan Thornton , the top US diplomat for Asia. “Not this kind of episodic back and forth that we’ve seen.”
​Tillerson, who has said the US would be willing to sit down with Pyongyang, but not until the regime halts its nuclear ambitions, skipped a dinner attended by North Korean foreign minister Ri Yong Ho. Tillerson aide R.C. Hammond said he was preparing for a second day of meetings.
But Ri seemed to be the odd man out at the Southeast Asian Nations Regional Forum as the 27-member group floated a proposal to temporarily kick North Korea out – although some felt that was too drastic.
Wang welcomed Ri’s presence, saying the gathering would allow him to “hear voices from other sides.”
While Ri hasn’t spoken publicly in Manila, North Korea’s state-run media said the US has disregarded the warning Kim’s government has sent with its two intercontinental ballistic missile tests in July and called the sanctions “desperate efforts.”
The sanctions – unanimously approved on Saturday – ban countries from importing North Korean coal, iron, lead and seafood products and prohibit them from letting in the country’s laborers who send money back home that helps fund Kim’s weapons programs.
Source>http://nypost.com/2017/08/06/china-turns-up-pressure-against-north-korea/
Posted by theodore miraldi at 3:42 PM