Missouri Gov. Eric Greitens joined calls Friday for state Sen. Maria Chappelle-Nadal to be expelled from the legislature after saying she hopes President Trump is assassinated.
The Republican governor put out a string of tweets noting that lawmakers have called on the Democratic lawmaker to resign and urged the Senate to kick her out if she refuses.
“Senator Chappelle-Nadal said she hopes the President is killed. Republicans and Democrats have called on her to resign,” he wrote. “… Last night, in an interview, she refused to apologize—twice. If she will not resign, the Senate can vote to remove her. I believe they should.”

Eric Greitens
✔@EricGreitens
Senator Chappelle-Nadal said she hopes the President is killed. Republicans and Democrats have called on her to resign.

Eric Greitens
✔@EricGreitens
Her response: "Hell no." Last night, in an interview, she refused to apologize—twice.

Eric Greitens
✔@EricGreitens
Replying to @EricGreitens
Her response: "Hell no." Last night, in an interview, she refused to apologize—twice.

Eric Greitens
✔@EricGreitens
If she will not resign, the Senate can vote to remove her. I believe they should.

Twitter Ads info and privacy
The St. Louis Post-Dispatch reported that Lt. Gov. Mike Parson backed the call, saying if she does not resign before an upcoming September session, he will seek her expulsion in his capacity as state Senate president.
The Senate could do so with a two-thirds vote.
Chappelle-Nadal made the original comment, since deleted, on Facebook.
“I hope Trump is assassinated!” she wrote.
Chappelle-Nadal eventually removed the post, but a screenshot was saved and shared on Twitter. In interviews with local outlets, Chapelle-Nadal said she regretted her post but not her anger at the president. She blamed her outburst on the president's response to the white supremacist violence in Charlottesville. 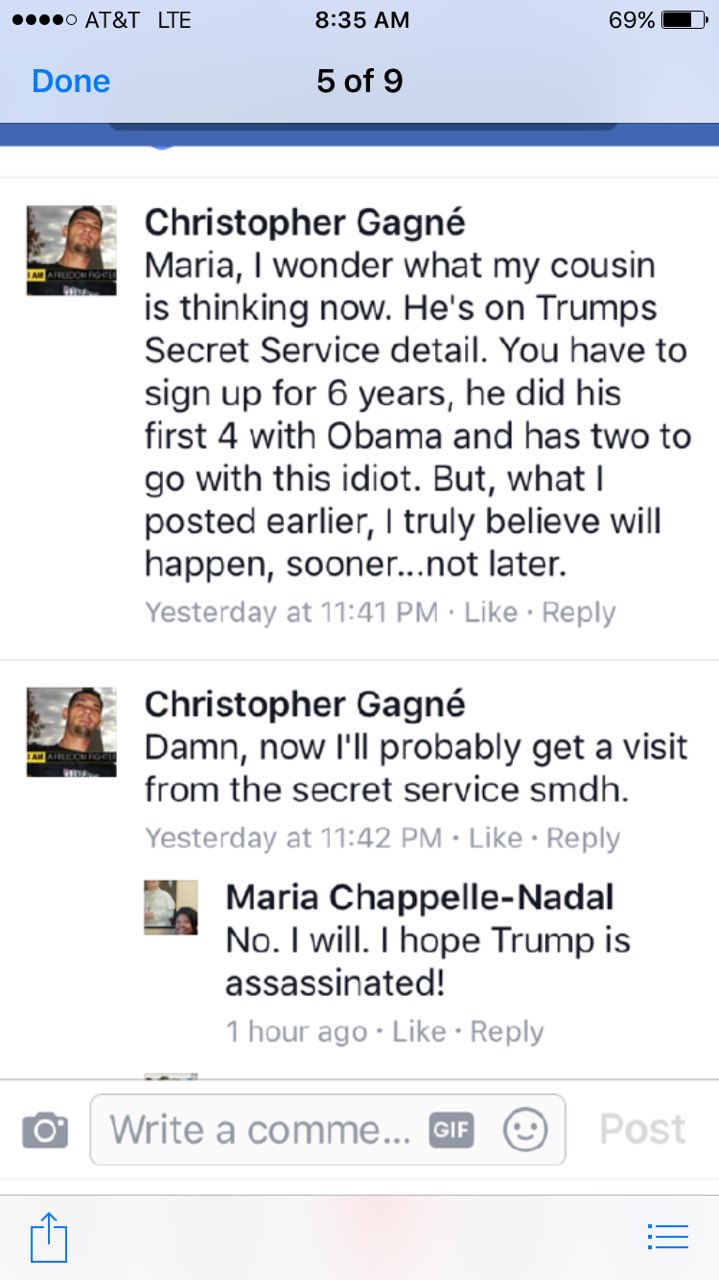 Mark Reardon
✔@MarkReardonKMOX
A Missouri State Senator from St. Louis has now called for the assassination of @realDonaldTrump. Keep it classy @MariaChappelleN.

Twitter Ads info and privacy
“I posted something on my personal Facebook and I should not have done that, and for that I am sorry for that," Chapelle-Nadal told St. Louis television station KMOV. "But I am not going to shy away from what caused that anger at all, I'm not going to shy away from that."
The Secret Service told The St. Louis Post-Dispatch it is investigating Chapelle-Nadal’s post.

Expand / Collapse
FILE - In this Sept. 10, 2014, file photo, Missouri state Sen. Maria Chappelle-Nadal speaks on the Senate floor in Jefferson City, Mo. Chappelle-Nadal says she posted and then deleted a comment on Facebook that said she hoped for President Donald Trump's assassination. The Democratic Senator says she didn't mean what she posted Thursday, Aug. 17, 2017, but was frustrated with the president's reaction to the violence last weekend in Charlottesville, Va.(AP Photo/Jeff Roberson, File)  (Copyright 2017 The Associated Press. All rights reserved.)
Meanwhile, top Missouri Democrats – including Sen. Claire McCaskill and the chairman of the Missouri Democratic Party – also are calling on Chapelle-Nadal to resign.
“I condemn it," McCaskill told the Post-Dispatch. "It's outrageous. And she should resign.”
Missouri Party Chair Stephen Webber called Chappelle-Nadal’s comments "indefensible.”
“I believe she should resign,” Webber said.
But Chappelle-Nadal told KMOX Radio she won’t quit.
“There is no way in hell that I’m resigning,” she said.
Source>http://www.foxnews.com/politics/2017/08/18/missouri-governor-calls-for-expulsion-dem-senator-who-urged-trump-assassination.html
Posted by theodore miraldi at 4:52 PM