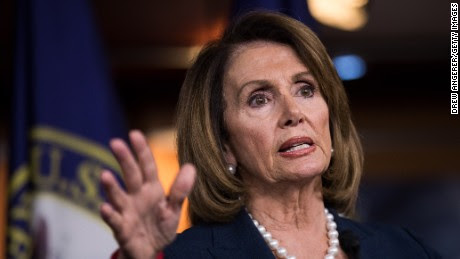 It took a while, but Democrats may finally have had enough of the antifa.
In a Tuesday statement, House Minority Leader Nancy Pelosi called out by name the antifa, or “anti-fascists,” for the first time since Sunday’s leftist violence in Berkeley.
“Our democracy has no room for inciting violence or endangering the public, no matter the ideology of those who commit such acts,” the California Democrat said in a statement. “The violent actions of people calling themselves antifa in Berkeley this weekend deserve unequivocal condemnation, and the perpetrators should be arrested and prosecuted.”
More than 100 antifa members, many wearing black clothing and masks, jumped police barriers Sunday at a Berkeley protest, chasing down and attacking a small number of Trump supporters, resulting in six injuries and 13 arrests.
Mrs. Pelosi initially made no public comment, followed by a statement to the Washington Times from a spokesman saying that she “has always emphasized the importance of ‘peaceful’ in the right to peaceful protest” without mentioning the antifa.
“In California, as across all of our great nation, we have deep reverence for the Constitutional right to peaceful dissent and free speech,” Mrs. Pelosi said in Tuesday’s statement. “Non-violence is fundamental to that right. Let us use this sad event to reaffirm that we must never fight hate with hate, and to remember the values of peace, openness and justice that represent the best of America.”
The antifa has come under increasing criticism for its efforts to shut down “fascists,” which sometimes means supporters of President Trump, from speaking at rallies such as the Berkeley No to Marxism in America event, which was actually canceled beforehand over fears of violence.
Berkeley Mayor Jesse Arreguin, a Democrat, told reporters afterward that he thought it was time to “classify them as a gang,” referring to the antifa.
“They come dressed in uniforms. They have weapons, almost like a militia, and I think we need to think about that in terms of our law enforcement approach,” Mr. Arreguin told CBS5 in San Francisco.
Patriot Prayer’s Joey Gibson, a frequent target of the antifa, had urged California Democrats to denounce leftist violence after he canceled his Freedom Rally scheduled for Saturday in San Francisco over public-safety concerns.
Prior to the event, Mrs. Pelosi had described his event as a “white supremacist rally,” even though Mr. Gibson is half-Asian and had scheduled a slate of mostly non-white speakers.
“I’m asking Mayor [Ed] Lee and I’m asking Nancy Pelosi to speak against this violence and speak against this hatred, and be consistent with your message,” said Mr. Gibson at a Saturday press conference.
The antifa declared victory after the melee, proclaiming in a Sunday post on the website It’s Going Down that, “Black Bloc Pushes Out Alt-Right, Reclaims Park.”
Those affiliated with the shadowy, secretive group have defended its violent tactics, including the use of baseball bats and other weapons, as a form of “self-defense” against fascism.
Antifa members have been blamed for the Feb. 1 rioting in Berkeley over the right’s Milo Yiannopoulos, whose speech was ultimately canceled, which caused an estimated $100,000 in property damage.
Source>http://www.washingtontimes.com/news/2017/aug/29/nancy-pelosi-finally-condemns-antifa-berkeley-viol/
Posted by theodore miraldi at 3:25 PM