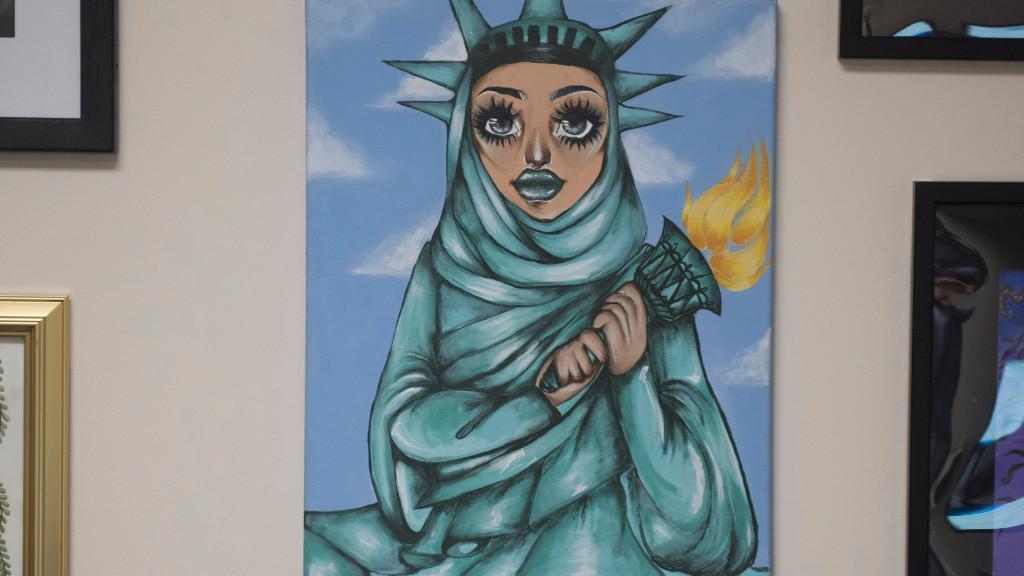 A Democratic congressman is taking heat from Sarah Palin and other conservatives for a painting hanging in his California district office that depicts the Statue of Liberty as a Muslim woman.
We the People Rising, a conservative-leaning activist group, was among the first to object to the painting in Rep. Lou Correa’s district office in Santa Ana, Calif., arguing it violates the separation of church and state.
The group, which advocates for tougher immigration laws, has asked Correa to remove the painting, which is a finalist in the Congress’ annual student art competition.
Palin entered the debate Monday with a tweet about the controversy.
"Statue of Liberty” Painting Found In Congressman's Office, Then America Spots Something Unusual,” Palin said in the tweet that included a retweet on the issue from the Young Conservatives group.
Correa, a first-term congressman, has no plans to remove the painting, saying the Office of Legislative Counsel sees no legal issues.
“You take it in the context of a lady, probably a Muslim American -- with all that’s going on, she’s a proud American,” Correa told The Orange County Register, which first reported the story.
This is not the first time a submission from the art contest has stirred controversy. In January, a painting depicting police officers as pigs, from Missouri Democratic Rep. William Lacy’s district, was removed from a Capitol Hill hallway where submissions are displayed.
We the People Rising has posted two videos on its website in which members go to Correa's district office on July 3 to ask that the painting be removed.
“You guys have a picture out in front of your office with the Statue of Liberty wearing a hijab, which I find reprehensible and disrespectful,” one of the members tells a staffer in the first video. “I would like to request that you remove it.”
The staffer says the theme of the art contest was “Faces of America.” He also said the controversial picture is among all of the finalists hanged in the district office and that the winning submission, which is displayed on Capitol Hill, honors WWII veterans.
The second video shows the group confronting Correa on the issue outside his office, just minutes after the meeting.
Source>http://www.foxnews.com/politics/2017/08/08/painting-statue-liberty-as-muslim-woman-in-democratic-congressman-s-office-stirs-controversy.html
Posted by theodore miraldi at 1:13 PM