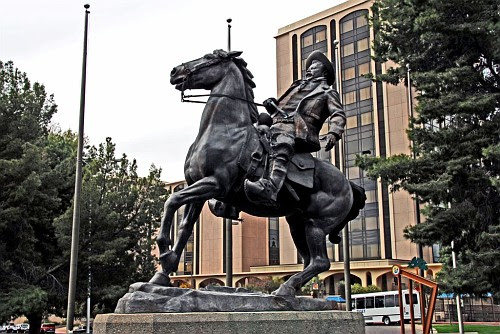 Monuments to Confederate generals have sparked a divisive debate, but not so a park and a statue in the Southwest that honor Pancho Villa-- the enigmatic historical figure who made a name for himself attacking the U.S. a century ago.
Now, Richard Dean, president of the historical society in Columbus, N.M., wants to see that change.
He told Fox News that he remains frustrated that the state park in Columbus--scene of Villa’s foreign invasion and the worst such attack on U.S. soil until 9/11—is named after the notorious figure whom he considers a terrorist.

“Is there a park in lower Manhattan named after Usama bin Laden?” asked Dean, whose great-grandfather was killed in the attack. “Of course not.”
Many Mexicans on either side of the border revere Villa as a Robin Hood-like figure. To pop culture he is a icon and and to the Mexican government a hero, which may explain why his image has avoided controversy.
Columbus was a remote border hamlet when Pancho Villa and his band of more than 1,000 “soldiers” invaded on March 9, 1916 and killed 18 Americans. During the raid, the hotel was looted and most of the town was burned to the ground. Two months later Villa supporters raided two small Texas villages, killing three soldiers and a civilian.
The Columbus attack spurred President Woodrow Wilson to send General John “Black Jack” Pershing and 6,000 troops to Mexico to look for Villa to bring him to justice. As part of the “Punitive Expedition,” Pershing pursued Villa some 400 miles into the mountains of Chihuahua but never caught him, fueling Villa’s outlaw reputation. Assassins killed him in Mexico in 1923.
New Mexico opened Pancho Villa Park in Columbus in 1965 on the grounds of the former Army Camp Furlong which housed Pershing’s troops.
Dean told Fox News he confronted the late State Senator Ike Smalley about naming the park for Villa on what he considers sacred ground.
“He would never answer me but close his eyes and smile,” he said.
Dean said he believes a majority of the town’s 1,600 residents agree that the park’s name should be changed. But he said that the town’s proximity to Mexico has made it difficult to garner support. Columbus is so close to the border that children from nearby Palomas, Mexico, cross the border to attend the elementary school.
Dean said that more than 30 years ago the town balked at installing a Pancho Villa statue in the park that was a gift from a group of Mexican journalists.
“There were a few little old ladies who survived the raid who said if the statue was put up in the park they would blow it up,” Dean said. “I know they would have done it, too.”
Instead, the 14-foot-tall, five-ton bronze statue of Villa riding a horse and brandishing a pistol was presented to the city of Tucson in Arizona. It sits in a downtown park where it remains today.
The statue's arrival wasn’t without controversy.
Tucson’s mayor at the time, Lew Murphy, refused to attend the unveiling ceremony. Others who stayed away complained that the city was honoring a figure who not only murdered Americans but his own people.
Still, the cremony drew a crowd of 600 people, including many Mexicans. They cheered the statue’s unveiling with cries of “Viva Villa!”
Lane Mandle, spokeswoman for the city of Tucson said a handful of people have complained about the statue both pre and post-Charlottesville.
The statue is considered a work of art and would have to go through a public process before it could be removed, she said.
“The deaccession of any piece of city art must go through a process as outlined in city Administrative Directive 7.01-7,” Mandle told Fox News. “That process has not currently been initiated for the Pancho Villa statue.”
Source>http://www.foxnews.com/us/2017/08/28/pancho-villa-park-statue-in-southwest-avoid-outcry-engulfing-confederate-monuments.html
Posted by theodore miraldi at 5:09 PM