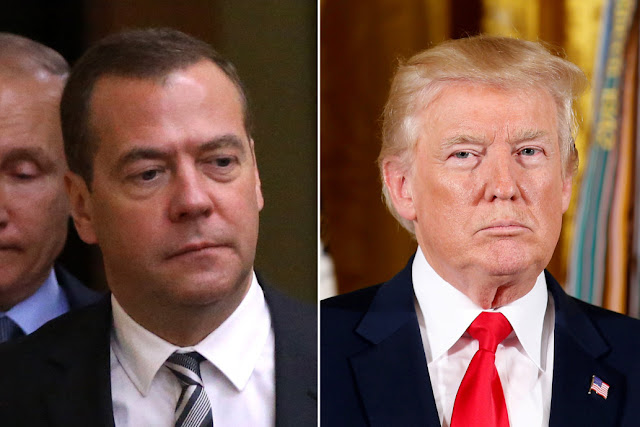 
Russia’s prime minister said Wednesday that a new sanctions bill signed by President Trump earlier in the day was the first shot of a “full-scale trade war” — and predicted the US president would be booted from office.
“The issue of sanctions came about, primarily, as another way to knock Trump down a peg,” Dimitry Medvedev wrote in a Facebook post.
“New steps are to come, and they will ultimately aim to remove him from power.”
Medvedev also said that the sanctions showed the Trump administration was powerless.
“The hope that our relations with the new American administration would improve is finished,” he wrote.
Trump signed the bill, which he called deeply flawed, to punish Russia for election meddling.
“The US establishment fully outwitted Trump; the President is not happy about the new sanctions, yet he could not but sign the bill,” the Russian prime minister wrote.
The law also targets North Korea and Iran for their nuclear programs.
Source>http://nypost.com/2017/08/02/russia-pm-predicts-establishment-will-remove-trump-from-power/
Posted by theodore miraldi at 9:05 PM