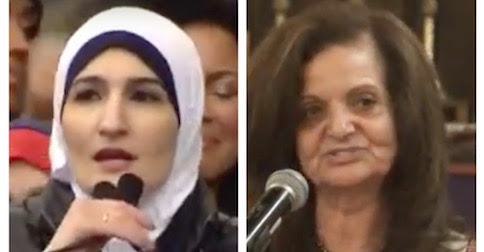 Ryan Saavedra
An associate of Linda Sarsour and an organizer for the Women’s March – who is a convicted terrorist and murderer – was stripped of her citizenship and ordered to be deported from the United States on Thursday after lying to U.S. officials.
Rasmieh Yousef Odeh (First name also spelled Rasmea), 70, lost her citizenship and will be removed from the U.S. for intentionally falsifying her U.S. citizenship documents after an in-depth investigation by Immigration and Customs Enforcement’s (ICE) Homeland Security Investigations (HSI), according to a statement from ICE.
Making the announcement was acting U.S. Attorney Daniel L. Lemisch and HSI Detroit special agent Steve Francis.
“Today’s court action clears the way for this defendant’s removal from the United States and should serve as an unequivocal message that the U.S. will never be a haven for those seeking to distance themselves from their past atrocities,” Francis said.
Lemisch explained Odeh’s past as a convicted terrorist before she immigrated to the U.S. in 1994 on an immigrant visa:

In 1969, the Popular Front for the Liberation of Palestine conducted two bombings in Jerusalem, Israel. One was at a Supersol supermarket, in which two individuals were killed and many more wounded. The second bombing was at the British Consulate. Defendant Odeh was arrested and charged with participation in the bombings, and in 1970 was convicted. She was sentenced to life imprisonment, but was released in 1979 after ten years’ imprisonment, as part of a prisoner exchange. In numerous television and video interviews throughout the years, other admitted participants in the bombings named Odeh as the person who chose the supermarket as a target, scouted the location and placed the bomb.

Far-left Palestinian-American activist Linda Sarsour – who recently called for Muslims to wage a form of “Jihad” against President Donald Trump – has a long history of defending Odeh and has spoken with her at events.
In April, Sarsour spoke alongside Odeh at an event and gave her a warm embrace, The Daily Caller reported at the time.
The New York Post reported at the event Sarsour said she felt “honored and privileged to be here in this space, and honored to be on this stage with Rasmea.”
In her plea agreement, Odeh admitted to lying about her criminal history by claiming that she had never been arrested, convicted of a crime, or imprisoned.
“Had Odeh revealed the truth about her criminal history, as she was required to by law, she never would have been granted an immigrant visa, admitted to the United States, allowed to live here for the last 22 years, or granted United States Citizenship,” ICE also noted in their statement.
Sarsour has also defended and promoted Odeh on Twitter.
Source>http://dailycaller.com/2017/08/19/linda-sarsours-terrorist-friend-stripped-of-citizenship-permanently-banned-from-u-s/?utm_source=site-share
Posted by theodore miraldi at 7:30 PM